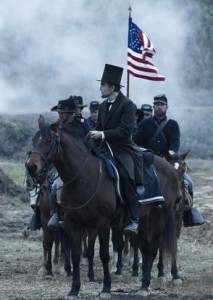 By focusing on those final four months or so of the life of the 16th President of the United States, Spielberg presents a narrative that should be wonderfully intriguing to the modern viewer so long as that person has some sense of history and politics. Someone looking for a dashing story of Lincoln’s dealings with his generals, military campaigns, and his transformation as Commander-in-Chief need not bother with this film, you will be hugely disappointed.

However, even if your knowledge of the struggle to pass the 13th Amendment is limited or nil, you will still be able to follow the story of Lincoln due to a masterfully written screenplay and marvelous acting. Speaking of acting, Danile Day-Lewis doesn’t just impersonate or capture the essence of Lincoln, he immediately mesmerizes the audience and transforms into the larger than life figure making you believe he was the man himself. Lewis captures Lincoln as you imagine him: the dry sense of humor, wit, storytelling abilities, and his calm and reflective nature. If this is not an Oscar worthy performance than I do not know what is.

The dexterity of the narrative to juggle all of the political happenings and discourse was phenomenal. The movie is a masterpiece that goes to another level with regard to historical storytelling; in my humble opinion. How Lincoln and his cabinet gets the required votes to pass the Amendment and the political juggling that took place I think was captured without becoming distracting or confusing. We get the point, politics is politics and Lincoln was a master politician. He was a man of law, but also of practicality. He might of did some controversial things, but once again, that’s politics. For more on this issue see here, and then here and here. Thankfully we have historians like Brooks D. Simpson who can remind us about the real Lincoln, just as this movie wonderfully does.

Lincoln in my opinion is second only to Washington as our greatest President and there is finally a movie that captures him and his times as perfectly as is possible with regard to a Hollywood production!