Union Civil War Soldiers and their Relationships with Blacks 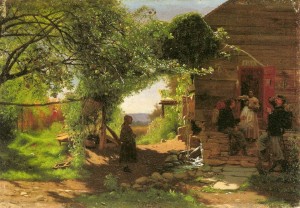 (Note: title originally read: “Contraband of War” but was removed)

Albert O. Marshall soldiered in the 33rd Illinois Infantry and served primarily along the Trans-Mississippi region from Missouri to Louisiana. In his journal (published in 1883) that he kept during the war, Marshall wrote the following comments concerning one of their early encounters with Negroes while in the South: “That these poor frightened negroes, who all their lives had been the slaves of their rebel masters, told us the truth, we did not for a moment doubt. We can always depend upon the colored folks to tell us the truth about the rebels.” (1)

I have come across numerous letters and other correspondences where Union soldiers encounters with blacks in the South were positive. Sometimes food and drink were given, and even sometimes Union soldiers in hiding were taken in. With this in mind I came across an Eastman Johnson painting over at Robert Moore’s blog (here). Mr. Moore proposed two questions, “First, note who is providing the Union soldiers with a drink. Second, I wonder, is that the Blue Ridge in the background?” I want to focus on the first question. I have not asked, but I wonder if Mr. Moore is puzzled by the presence of blacks offering substances to Union soldiers?

There are some damaging depictions of the Union soldier and his treatment of “contraband” during the war (here for example). Now I understand that “contraband” and Negroes living in the South are probably two different things, but the point is the treatment of Union soldiers towards blacks, and how open and offering were blacks to the soldiers?

Now I always take certain sites with a grain of salt, but certainly there were transgressions committed on blacks by Union soldiers. And I have read plenty of letters that express not so flattering views by Union soldiers on the contraband they encountered. Many soldiers did resent them and their expressions in post 1863 letters is at best much divided on their views towards Lincoln’s proclamation and the issue of freeing slaves in the South.

So I for one am not surprised by the presence of blacks offering a drink to thirsty Union soldiers as I know this happened, and fairly often. However, there is another question and that is identification or maybe better the over-stating of Union soldiers relationship with blacks during the war. Letters and diaries are always problematic and I could pull up a folder on my computer and find many to support almost any claim. That this painting does or does not misrepresent the relationship between Union soldiers and blacks.

One interesting comment I did find in Soldier Studies database (here). I have come across, more and more, the shock and astonishment of Union soldiers upon the discovery of “white slaves.” I really believe that that experience impacted soldiers the most and shaped a lot of their views and perceptions on slavery. I think it started some to turn towards abolitionism as a goal of the war and for others made them at least rethink the war and what were legitimate goals to be achieved.

Next post: Lincoln’s Thinking Bayonets: “They died for love of country, for you and for me…”