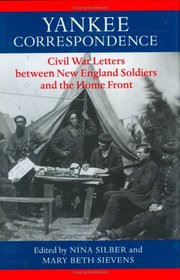 These letters by New England soldiers and their families, many published for the first time, speak of the hardships of the war, especially frustrations with the army, homefront suffering, and government policies. They are grouped by six major themes: the military experience, the meaning of the war, views of the South, politics on the home front, the personal sacrifices of war, and the correspondence of one New England family.

Organized topically by chapter based on the subject matter of the soldier’s letters, the authors weave a wonderfully readable yarn of soldier correspondences. The topics range from the homefront, politics, hardships of soldiering and combat experiences. However, the chapter I found most interesting was their views on the South they encountered as soldiers from the North trekked South and encountered its people, culture and homeland. The results of such a journey for the average Union soldier is a current research subject matter (among a few others) for me. The typical experience of a Northern soldier as they experienced the South up-close and in person consisted of many common reactions to things like slavery and the so-called “chivalry” of the South. Of course being horrified of the institution of slavery and what it did to blacks was common, but what shocked the soldier most was the encountering of “white” slaves. But what I am also fascinated in is the myth of Southern Exceptionalism of the Antebellum South. The South encountered shocked and surprised Union soldiers.

Calvin M. Burbank, of the 7th New Hampshire Infantry, summed it up best when he wrote home after encountering Southern life for the first time:

“We have all read in glowing verse of poetry charming accounts of beautiful, sunny south. Either I am mistaken, or else that exists in the fevered imagination of the poets head. Charming South indeed. No roads, no bridges, no towns, or villages, no churches, no schoolhouses, no beautiful and tasty country residences to meet the eye…”

To be sure some exaggeration on the part of Mr. Burbank, but also surely some truth to his diatribe of complaints about the condition of the South; and all this in 1861!

I think part of the transformation of the North in its approach to the war, going from a conciliatory policy to the now commonly known “hard war,” was partly a transformation of the soldier. They grew to hate Southern culture and what produced slavery, and not just slavery. They began to understand the degree to which the South was a slave society and that to defeat it, slavery had to be destroyed. Yet soldiers did hold some deeply racists views of blacks and some even held them in contempt, of course. However, their views of blacks did not have to change in order for them to change their views of slavery.

Yankee Correspondence: Civil War Letters Between New England Soldiers and the Home Front is a nicely arranged collection of hand picked letters that help the reader gain some insightful views of some Civil War soldiers.