…in this her hour of greatest need 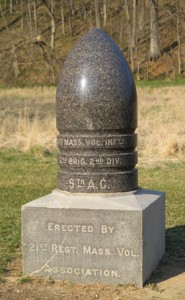 A new series of letters is being patiently added to the archive. Today the first in what will be many additions from William H. Clark, who was a Captain in the Twenty-First Massachusetts Infantry. Here’s part of the letter:

I have received three letters from home since I have been here though two of them were quite old (having made a voyage to Newburn in quest of me), but they were most welcome notwithstanding their age. What we are to do or when we are to do it I can form no opinion. I am quite confident that no important movement will be made by McLellan for some time, said length of time to be determined by the alacrity displayed in the North in forwarding reinforcements. I think that the northern citizens and officials and all others who have so longtime been bewailing the enormous expense which our large army (though no so large as they would make the public believe) is entailing on the country, must now see that the South is united and determined to overthrow this government, and that the only way to prevent the accomplishments of this infernal scheme is for all loyal men to tender at once their services to the country in any way in which they can be most useful. And, in their united strength, strike a blow at the rebellion which shall crush it at once and forever. It can be done, of this there is no shadow of a doubt, more than this – it must be done, but it can not be done without an effort and that effort must be a mighty one. It is high time to view this rebellion in its true light – in the fullness of its power, which is by no means to be despised or made light of. It is time to believe what can no longer be doubted – that the rebellion is as wide-spread as the territory that the rebel leaders lay claim to and the spirit of the rebellion, or revolution (as they perhaps term it) is most thoroughly infused into the hearts of the entire population…