Did the Civil War create a lot of Morphine Addicts? 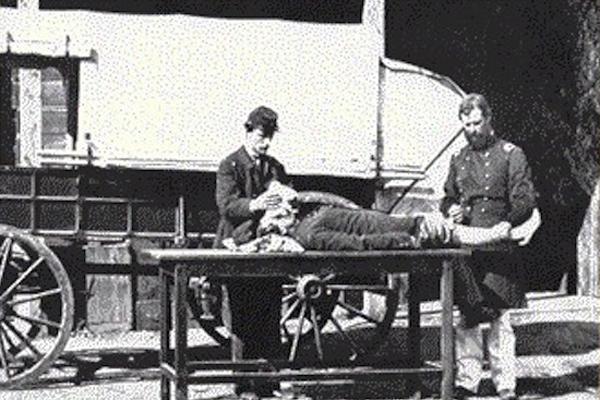 A question posed in 1999 asked, “I’ve often read that there were 500,000 morphine addicts running around after the Civil War. Is this true? If so, did narcotics have a deleterious effect on the Old West? How many cowboys were wacko on these then-legal drugs?”

According to one interesting source, the answer was… maybe:

Still, even allowing for exaggeration by drug alarmists, you have to think the Civil War had some impact. Narcotics were handed out like candy by army surgeons, who were surrounded by suffering and had few remedies to offer other than painkillers. Nearly ten million opium pills were issued to Union soldiers, along with 2.8 million ounces of other opium preparations; no doubt opium use was fairly common on the Confederate side, too. One doctor reported keeping a wad of “blue mass” (a powdered mercury compound) in one pocket and a ball of opium in the other. He’d ask soldiers, “How are your bowels?” If the answer was “open” (due to diarrhea), the soldier got opium, if “closed” (presumably because of constipation), mercury. Opiates were used to treat not just wounds but chronic campaign diseases such as diarrhea, dysentery, and malaria. Narcotics became even more popular after the war as invalided veterans sought relief from constant pain.

That said, soldiers weren’t the only or even the major users of drugs, nor was drug abuse more prevalent in the Old West than in the rest of the country, as you suggest. On the contrary, casual use of hard drugs was widespread. Several surveys in the midwest in the latter 1800s found that the majority of opiate addicts were women who took drugs for neuralgia, morning sickness, or menstrual pain. Mary Chesnut, whose diary was read to haunting effect in Ken Burns’s Civil War documentary series, was a regular user. Narcotics could be found in the patent medicines of the day as well as in commonly prescribed medications like laudanum and paregoric, inexpensive opiates that could be ordered through the Sears catalog.

As we know morphine sulphate was liberally given to soldiers during the war. Post Civil War era gave birth to what was called the “Soldier’s disease.” There are sources that claim up to 400,000 veterans of the Civil War left the army with some level of addiction. After the war opiates were widely used to cure any form of ailment. Drugs were so widely used you would order them from your Sears and Roebuck catalog. However, there are no studies that were taken from 1865-1900 that would account for any significant portrayal of soldier addiction. In 1886 former Confederate soldier Dr. John Pemberton invented Coca-Cola; which contained a small amount of cocaine. Pemberton was a pharmacist and was even wounded in the Battle of Columbus.

In 1915, Jeannette Marks, first alerted the nation of the potential for as many as 400,000 post war veterans being addicted. To this day historians disagree about the impact of drug addiction after the war, with the number ranging anywhere from 45,000 to 400,000.