The Civil War Soldier After the War: The Veteran in a New Field 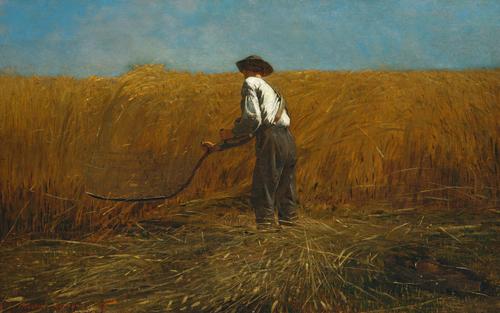 He came home so changed that his best friends did not know him, but is well & all right now.

— Henrietta Maria Benson, describing her son, Winslow Homer, when he returned from the Civil War.

Painted through summer and fall 1865, not long after the nation came to grips with Robert E. Lee’s surrender and mourned President Lincoln’s assassination—both of which occurred during the second week of April—Homer’s canvas shows an emblematic farmer who is a Union veteran, as signified by his discarded jacket and canteen at the lower right. The painting seems to blend several related narratives. Most soldiers had been farmers before the war. This man, who has returned to his field, holds an old-fashioned scythe that evokes the Grim Reaper, recalls the war’s harvest of death, and expresses grief at Lincoln’s murder. The redemptive feature is the bountiful wheat—a northern crop—which could connote the Union’s victory. With its dual references to death and life, Homer’s iconic composition offers a powerful meditation on America’s sacrifices and its potential for recovery. (Source) 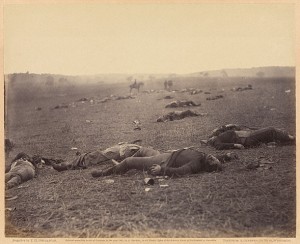 The symbolism is poignant and haunting. The average Civil War soldier was a farmer, and for many Union soldiers, they were wheat farmers. They returned to their farms, their homes, and to the harvest. Soldiers from Wisconsin, for example, who enlisted in 1861 recalled often in their letters home in 1862 of the harvest. For as we know, most thought they would be back in time to plant the next crop. The fields of death as captured by Timothy H. O’Sullivan’s famous photo, present a forceful dichotomy of the fields of life and death.

Previous post: The Typical Soldiers of our Civil War were…

Next post: The Journal of the Civil War Era