What Happened to Civil War Soldiers After the War? 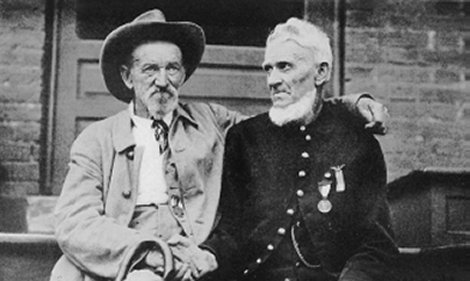 Much has been written about the hardships of soldiering during the Civil War. However, what of the soldier when he returned home after the war? How did he reintegrate into society and what was left waiting for him? By the 1880s soldiers began to reminiscence about the war in memoirs and regimental histories. But yet there was still a population in both the North and South that drifted from soldier home to soldier home, from town to town, jail to jail and some (perhaps many) living their last days in insane asylums.

Most returned home, picked up the pieces, and moved on. But some could never find that peace.

The first step was returning home. Hundreds of thousands of soldiers traveled by train, horse and foot. Southern soldiers often had the hardest time getting back to their loved ones. Upon returning home, some soldiers might have found that the life they had left behind was gone.

James S. Dupray served honorably with the 12th Iowa Volunteer Regiment, he returned home to “find neither wife or children to greet me.” But that was not the truly stunning news for his “children [were] scattered one in one place and [one] another” and his “Dear wife in her grave.” The loss was almost more than James could bare, “I had nothing to live for and I wanted to lie down in the grave by her side…” Still for his children he soldiered on, selling all the property he had left (totaling $600) and putting it all into an investment property.” When home, one of the more difficult adjustments involved dealing with those who did not “do their duty” and fight for the Union. Dupray noted how those “loyal men [who] enlisted & gave in defence of their country, leaving the traitors at home to rule matters there.”

Families were often waiting in earnest for the return of love ones only to discover that the boy who left for war returned almost unrecognizable. Polly Razey McColley wrote to her son concerning the return from the war of his brother:

He could not talk hardly any. I think he was out of his head when he first came home for when we saw him coming we went to meet him and Emily (his twin sister) got to him first and I see he could hardly walk and when I got to him I said Emery are you well and took hold of his hand. He said, yes I was never weller in my life…

Soldiers who were either unwanted or unwilling to stay at home drifted from place to place. Many found their way West and to the Frontier. There some found peace, bought land, and settled down. However, others, such as a veteran name “Len” found themselves in deep trouble. He was put on trial for murder and it was found that “He is not violent but seems to be almost wholly devoid of his mental faculties.” They were not even sure who he was for sometime:

“Len,” is sixty odd years of age and a veteran of the Civil war, on account of which service he receives a pension. He was unable to tell anything of his relatives, but from papers found among his effects it is evident that he has a nephew, a lawyer and prominent citizen of Reading, Pennsylvania.

At one asylum, James Trainor, a Civil War veteran was reported in 1884 as being “insane suffering from Chronic Mania. This man is insane and [amaisotic]. Is unable to give an account of the date of the war, and yet says he was in the army, but knows not if he was in the Confederate or Federal army, if the war took place 5 or 50 years ago.” It is not know if he had a head injury or was simply ruined from his war experiences.

Yet another story that deserves to be presented in its entirety:

You can’t help but feel sympathy for Uncle Con when you read through his 136-page Civil War pension file. He really was a poor old guy who was a bit overtaken by life. The file itself is a fascinating combination of dry bureaucratic government correspondence, personal letters dictated by Uncle Con, letters and documents from his sister, nieces and nephews and finally, the documents from his funeral and burial in 1917.

Uncle Con’s letters are primarily to various government officials inquiring about the status of his pension payments while he was institutionalized in a string of Soldier’s Homes and insane asylums between 1902 and 1916. What appears to have happened is that Con’s pension checks were, by law, sent to the institutions he was in to pay for his room and board. However, Uncle Con was convinced that he was being unjustly deprived of his money. To the government’s credit, each of his complaints was followed up and documented to show where his money was going.

His rambling letters show someone who was confused and a little paranoid. But they also show flashes of clarity and awareness and give crucial clues about his background to help fill in some of the large blank spots in his history. In spite of any mental illness, the letters also indicate that his treatment in these various homes consisted — not surprisingly — more of warehousing than care. The Soldier’s Homes may have given state-of-the-art care in their day, but seem to have been prone to the shortfalls common to many institutional care facilities even today.

Though records for insane asylums are often limited if not missing, it appears that a significant number of old veterans ended up being wards of the state in some fashion or another.

If it wasn’t the veteran putting himself in the asylum there are even records I have come across where a wife or family will admit their loved one and sometimes under false pretenses in order to gain access to their pension.

Larry M. Logue’s To Appomattox and Beyond : the Civil War Soldier in War and Peace (Chicago : I.R. Dee, c1996.) devotes several chapters to the Civil War soldier after the war. Here are some of his findings:

In 1879 the U.S. Surgeon General estimated that 45,000 veterans were addicted to morphine.

Newspapers often reported of destitute ex-soldiers and of veteran suicides.

We also know that Southern soldiers returned to a defeated and often destitute home. It would be years until individual Southern states initiated pension plans, and the aid given could never match what the Union soldier received. Soldiers who suffered the amputation of a limb in both North and South faced hardships and destitution. luckily for the Northern soldier the soldier home and pension plans kept them afloat.

After spending some time researching the soldier after the war I have determined there is simply not a lot out there. Would love to hear from you if you have any suggestions and/or sources to share!

Previous post: Lincoln’s Thinking Bayonets: “They died for love of country, for you and for me…”