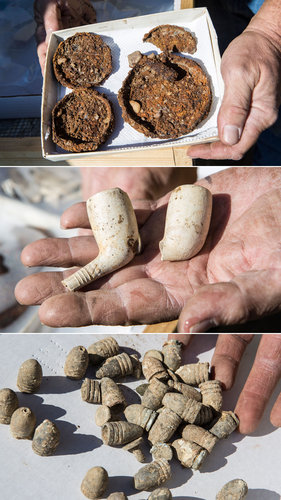 A recent archeological find concerning the Battle of Fredericksburg in what is described as a “near-perfect preservation” of the basement of a home where Union soldiers had most likely holed up for the night. So preserved is the site that John Hennessy, a National Park Service historian, noted “[it] a pleasant happenstance that most of us in our lifetimes won’t ever see again.” Sounds like a wonderful find and will be revealing about what happened in town and the combat that took place.

In the New York Times newspaper article about the dig, the reporter stated the following: “In the lead-up to the battle, Burnside showered the city with artillery to dislodge Lee’s forces. There was door-to-door street fighting — a Civil War rarity — and evidence that federal troops rampaged through the city, looting and vandalizing.”

Previous post: Book Review: To Petersburg with the Army of the Potomac: The Civil War Letters of Levi Bird Duff, 105th Pennsylvania Volunteers