We were not able to enter this into the database without a soldier ID, but it is an interesting letter from home to a soldier from his wife. 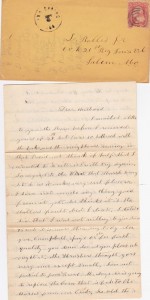 I mailed a letter to you the morn before I received yours of the 24th but I was so bothered with the baby and the neighbors running in that I did not think of half that I wanted to write so I will try again.

In regard to the wheat that Marsh brought to us, it makes very dark flower and I have not made anything good from it yet he thinks it is the miller’s fault but I don’t. I told him that I was not willing to give him 75 cents. It is more then anybody else gives. Campbell pays 65 cents for first quality. You can do as you please about it. The Trasher thought yo very nice except small. I am not partial to poor bread. M says he is going to replace the corn that is fed to the horses from our crib. He sold the largest hog $2.15 a hundred. 200.88 pounds was what it weighed. There is $25 due him now. I hope we shall have it for him before he goes home. Mr Killpatrick has been here collecting his bills. He sold your note to Brother Bell on the note that he holds against you. Brother B called here a week ago Said he wanted to go to Ohio next spring to get a lot of sheep and if you can pay him all or a part of the note he should like it. Pay little at a time if you would like but he said tell Brother Bolles not to feel any anxiety about it if it is not convenient then let it go until you can pay. Charged me not trouble myself about it.

I wish I had a host of news to write but I have not been from the house since I went with you so I don’t get much news. I have been invited to Mr Byington’s twice but I do not intend to go anywhere this winter. Mr Byington’s folks talk of going East soon to spend the winter. Sell his place then come in the spring and build there. Boy is not well—-child it very sick. Poor Mrs Huslam. I do feel sorry for her. She is very feeble.Has had the Doctor once and ought to again. Mr Pope wants Devite to get a customer to buy his farm when he gets back east. I don’t know what he wants to sell for. Mr Clausland is going into his new house soon. It is not going to be lathered nor plastered this winter. Omsted is going into his one house. Our people keep up Sunday School and meetings yet. From that I hear I don’t think Brother B style of preaching. Pleases the people. Youran has closed his business. Says he is going to war but I don’t believe it. Sine writing the above I hear that you have left Salem. Now I shall feel more anxious about you. Suppose the regiment will have to go into battle soon. It is awful. I hope you will keep out of the way of the Rebels. Please write often for I shall want to hear from you more than ever. We are all well and as happy as we can be without you. We all send a great deal of love to you. Mrs Haslum had a letter from Mr H last night. What is the matter with him? I hope you will always tell me just how your health is. You did not speak of it in your last.

Yours with much love,

Previous post: Confederate Soldiers during the Gettysburg Champaign, we “made the inhabitants feel the horrors of war”