The Iron Brigade in Civil War and Memory (Book Review)

The Iron Brigade in Civil War and Memory
The Black Hats from Bull Run to Appomattox and Thereafter
Lance J. Herdegen

Lance J. Herdegen is the Award-winning author of Those Damned Black Hats!: The Iron Brigade in the Gettysburg Campaign and is the former director of the Institute of Civil War Studies at Carroll University. He is the author of several other books dealing with various aspects of the famed brigade. Though already honored for his work, Herdegen’s latest book, The Iron Brigade in Civil War and Memory: The Black Hats from Bull Run to Appomattox and Thereafter, might be his best. 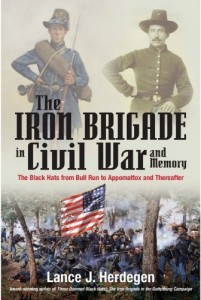 Tackling not just a specific battle or regiment in the Iron Brigade, this time Herdegen presents a complete and detailed study of the entire brigade—a massive work of over 600 pages in length. The book is organized by year an then broken down into parts. Each section is grouped as such: “1861: Greenhorn Patriots”; “1862: Iron Brigade of the West”; “1863: Gettysburg”; “1864:The Overland Campaign to Petersburg”, “1865: Victory.” There is also a “Postscript” where Herdegen follows the regiment after the war and much later. Picking up the narrative again, years later, and after the raising of families and growing old, the men gathered in reunion to reflect on not just their service, but the whys of service. Why did they fight? To free the slave or preserve the Union? The “memory” aspect of the study is something that a lot of regimental historians do not well enough in my opinion. I have seen Epilogues number just five pages and even when well done they do not delve into how and why the men reunited; what was life like after the war? Usually these other books center on when a few important soldiers died and what they did after the war. Herdegen does a good, not great, but a very nice job of finding a post-memory framework for the regiment as he tackles such key topics as Why they Fought?

One of the most poignant stories within the larger story of the men who made up the brigade centers on Rufus Dawes, one of the most famous soldiers of the Iron Brigade. After the war he returned home with his black army servant William Jackson, who went on to work various jobs. A year after the war Jackson asked Dawes to help him find his mother who was still in the South. They did and she was eventually brought north. When she arrived she had been so severely beaten and weathered by slavery that he could barely recognize her. A most heartbreaking event for both Jackson and Dawes.

Retelling the legendary achievements of the regiment in combat was only part of the narrative for Herdegen as he takes you to ground zero and the individual soldier. He cites an impressive number of soldier excerpts from countless diaries, letters and other correspondences. The research is exhaustive!

The reader gains not just first hand accounts of the battles, but also of camp life, politics, and military strategy. Some of the more interesting passages are when the men encountered their superiors for the first time, people like: McClellan, Hooker, and of course Lincoln. As their “real time” thoughts back in 1862, 63, and so forth on emancipation and slavery are also highlighted.

Herdegen is not just a historian but a storyteller as well and he weaves a good yarn. His books are engaging and his grasp of the content provides for sweeping detail without a lot of heavy lifting on the part of the reader. A good unit history keeps the reader up to speed on whats happening around the regiment as they march and fight. Herdegen does a fine job of this filling in the details while telling the story of the soldiers and the officers.

Savas Beatie as usual produces some of the finest quality books: paper, production, artwork, cover, index, ect. are all top notch. I also like that it contains footnotes and not end notes so I can quickly look up the source and take notes. When I read a book I have my pencil in hand and constantly underline passages and write notes all over the margins of the pages. I hate having to flip back and forth from the end notes to the chapter. Savas Beatie understands what historians want when reading a book!

So obviously I highly recommend this book to any student of Soldier Studies and any enthusiast, researcher and/or historian interested in the the Civil War!

Why another book on the Iron Brigade? Because this is really the first book on this storied outfit—and it could not have been written without the lifetime of study undertaken by award-winning author Lance J. Herdegen. More than a standard military account, Herdegen’s latest puts flesh and faces on the men who sat around the campfires, marched through mud and snow and dust, fought to put down the rebellion, and recorded much of what they did and witnessed for posterity.

The Iron Brigade is one of the most celebrated military organizations of the American Civil War. Although primarily known and studied because of its remarkable stand on the first bloody day at Gettysburg, its stellar service during the earliest days of the war and from the Wilderness to Appomattox has been routinely slighted. Herdegen has finally rectified this historical anomaly with his The Iron Brigade in Civil War and Memory. Composed originally of the 2nd, 6th, and 7th Wisconsin, 19th Indiana, and Battery B of the 4th U.S. Artillery, the brigade first attracted attention as the only all-Western organization serving in the Eastern Theater. The Regular Army’s distinctive felt dress hat earned them the nickname “Black Hat Brigade.” The Westerners took part in the fighting at Gainesville (Brawner’s Farm), Second Bull Run, South Mountain (where General McClellan claimed he gave them their famous “Iron Brigade” moniker), and Antietam. Reinforced by the 24th Michigan, the Black Hats fought at Fredericksburg and Chancellorsville. But it was at Gettysburg on July 1 where the brigade immortalized a railroad cut and helped save the high ground west of town that proved decisive, but was nearly destroyed for its brave stand. Reorganizations, expired enlistments, and different duties split up the famous outfit, but some of the regiments fought on through the Wilderness to Petersburg and finally, Appomattox. Only when the war was ended did the Western boys finally go home.

Herdegen’s magnificent The Iron Brigade in Civil War and Memory, sure to be looked upon as his magnum opus, is based on decades of archival research and includes scores of previously unpublished letters, photos, journals, and other primary accounts. This well researched and written tour de force, which includes reunion and memorial coverage until the final expiration of the last surviving member, will be the last word on the Iron Brigade for the foreseeable future.

When we were young, explained one Black Hat veteran many years after the war, we hardly realized that we “had fought on more fields of battle than the Old Guard of Napoleon, and have stood fire in far greater firmness.” Here, at long last, is the full story of how young farm boys, shopkeepers, river men, and piney camp boys in a brigade forged with iron helped save the Union.