Another letter we were not able to ID the soldier and also a good letter: 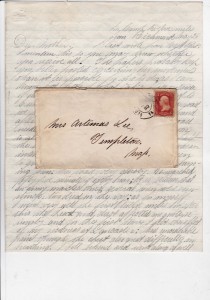 In Camp twelve miles from Richmond
May 25

I last wrote from West Point. I mentioned this so you may know whether you received all. The papers probably keep you better posted concerning our movement than is possible for me to do as I can know but little of what takes place outside of our division. We went from West Point to Cumberland nearly twenty miles by the road we took. Left camp at an early hour but found after going a short distance that the road needed repairing. It took us until near noon to accomplish this thus leaving only half the time intended for our march. It was an intensely hot day not a cloud to be seen to give us the least respite from the burning sun. The road very dusty.

We marched fifty five minutes every hour. It is seldom an army marches thus. Several men were sun struck. Two died on the way. As for myself. I went very well the first twelve miles but after this the heat and dust affected me quite seriously and for the first time I felt the effect of my sickness of Lancaster. Had considerable pain through the chest also great difficulty in breathing. I fell behind and went along as well as possible. Did not get to C until late at night and I am sorry to say the effect of that march have not left me yet. Any exertion brings on the trouble of breathing and my head is not right. Since then I have had several dizzy turns also a continued pain. These are probably caused by the heat. It is as warm here now as at home in simmer but the nights are very cold and damp. From C we went to White House. This is a fine plantation containing several thousand acres extending along the banks of the Pamun Key River. Here Washington did his courting. The old house was destroyed by fire a few years since but the — and one I am told very much resembles the original. It is a common two story dwelling with chimneys outside. A short distance from the house is a long row of negro huts. The house and I have yet seen without any floors. Almost too filthy for human beings to live in. Mrs Lee left a few days previous taking part of the slave but more than one hundred remain. They are very ignorant. None of them can either read or write. They did not seem to know anything about the war but were very glad when we came.

From W.H. we came here by easy marches. We passed a few fine places but most of them were very poor. Nearly all the people have deserted their homes and gone to Richmond. I asked one man the cause of this. He said that they were in a perfect panic believing everything that had been told them concerning us. Every one agrees that there has been terrible times about here. Every able bodied man has been forced into the army. One man told me that a short time since a squad of men came to his brother’s house. Took him from his family and carried him away and all that saved him was a disabled hand. Another man sometime since paid $700 for a substitute. This man has lately been forced into the army.

Provisions very high and scarce. Coffee $1. to $1.50, tea $5., sugar 50 and 87 cents. Lately tea could not be bought for any price. Some think we shall have a hard fight before we get into Richmond. Others that the Rebels will think discretion the better part of valor and run. One man told me he was in R. three weeks since and at that time there were no fortifications. His negro, however, was there one week after and he reports one fort heavily mounted. How true these stories are I can not say.

Contrabands come in every day. Most of them are quite bright and intelligent. They all agree that the people were in favor of Davis but as soon as we came they run up the white flag and what few remain profess Union sentiment.

McClellan is evidently waiting for some other part of the army to move before he presses the enemy too hard. I think for Burnside to get possession of the railroad through N.C. if he can do this and prevent their retreat south. Banks and Fremount will stop their getting into eastern Tenn. Then it will make not material difference whether they stand or retreat from here as they will be entirely surrounded and cannot get out of the state. I certainly hope they will meet us here. We have followed them far enough.

In one of your letters you spoke of sending one by Dr. William containing Ellen and Josies’ photograph. It has not been received. When it is returned to you please send the photographs by mail.