Splender Heroism of a Private 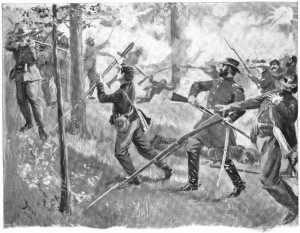 IT SEEMS strange and paradoxical even that war with the horrors of the battlefield should serve to bring out the highest virtues and noblest impulses of mankind. The same cannon ball that carries death and injury, that destroys many a hopeful life, arouses at the same time along its swift and fatal course an increased feeling of patriotism, awakens bravery and incites men to the most brilliant deeds of heroism. Amidst the roar of guns and the hail of bullets sentiments of the most tender kind are born. Love, friendship, and sacrifice have found their most fervent manifestations on the battlefield. The love and admiration that a soldier, a mere youth, bore toward his commander forms a highly touching incident of the war. The scene was at the battle of Perry ville, Ky, October 8, 1862, the heroes were Private W. G. Surles and Colonel Anson G. McCook.

Colonel McCook, commanding the Second Ohio Infantry had attacked the rebel infantry under General Bragg. The Confederates outnumbered the Union forces almost three to one, but, with noteworthy skill and bravery, the latter inflicted severe losses on the enemy, and retreated in good order.

“Although General Buell with a large force was within sound of our guns” Private Surles says, ” he did not come to our assistance and we were forced to fall back. During the retreat Colonel McCook s horse was shot from under him.

Arming himself with a musket taken from a dead soldier, he fought on foot and by his own gallant example, cheered the drooping spirits of his men. The ground we traversed was thickly strewn with the dead and, wounded of our own
army and presented a ghastly picture.

“We observed with horror that our pursuers, with the cruelty of barbarians, were plunging their bayonets into the prostrate forms of many of our comrades. Colonel McCook himself noticed one of the ghouls, just about to extinguish the life of one of our boys with his bayonet. The colonel halted, fired his musket and dropped the fellow, before he could accomplish his dastardly deed.

“The death of the rebel made the enemy still more furious. A Confederate soldier, a veritable giant in appearance, presently sprang from behind a tree close by and took deliberate aim at the colonel. I had observed this fellow s
movements and realized the great danger of my beloved commander. How I wished I could with a well-directed shot, end this Johnny s life. But like the colonel himself I had just fired my musket and did not have time to intercept the shot. My blood froze in my veins as I saw the rebel raise his gun and take aim at our brave leader. Presently, on the spur of the moment and moved by the love and admiration I felt toward our commander I sprang directly in front of Colonel McCook, ready to receive the bullet, which was to strike him.

“Happily the rebel giant was a little too slow in firing or hesitated to make sure of his shot ; anyway, before he pulled the trigger, he himself was shot through the head and rolled on the ground to die within a few seconds. One of the crack shots of our company had frustrated his plans.

“All of this happened, while shot and shell were flying around us like hail, and within less time than it takes to tell it. I should not forget to mention the conclusion of the episode, for it made me the happiest man in our regiment and has ever been one of the proudest moments of my life.

“When Colonel McCook saw his would-be assassin fall, he took me in his arms and with tears in his eyes kissed me as a father would his son.

” We all ” Private Surles ends his narration ” fairly idolized our commander and I m sure, every one in our regiment would have willingly sacrificed his life as I was willing to do. I suppose, the fact, that at the time I was a mere boy, weighing less than 100 pounds and of almost girlish appearance, while the rebel was such a big, burly man, made the incident a trifle more prominent, than it, perhaps, otherwise would have been.”

Private Surles served with his regiment throughout the war. At the battle of Chickamauga he and an older brother were fighting side by side. Both were giving a good account of themselves and paying back the enemy shot for shot, when the older brother was struck by a bullet, fell and died before William could grasp him in his arms or bid him a last farewell.

In addition to these two battles Private Surles fought with great distinction in some of the bloodiest battles of the war.