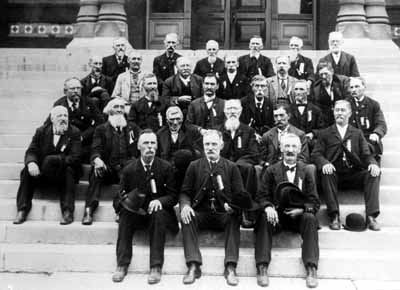 Spent much of today working/research for yet another book on Civil War Memory (I am a good year away from a compete manuscript!) that focuses on the soldiers and how they remembered such issues as patriotism, Union, slavery, ect., as expressed in their reunion association publications.

Though historians emphasize that Civil War veterans were citizen first and not professional soldiers, these men hardly talked nor acted like it as they reunited to remember the war years after their service. For these men, their special bond and experiences as soldiers defined their lives. They were soldiers in every sense of the word. I believe these reunions played an important part in displaying how these men processed the outcomes of the war. It is from the Fifth Reunion of the Third Wisconsin Infantry. This is the opening speech given by the president of the regiments association. It is important for several reasons, but for today it is the inclusion of slavery and emancipation that is included in their historical narrative of remembrance.

Comrades: Again we are met to extend to one another a soldier’s greeting. The divine will of Providence has so ordered our steps in this march of life that we find ourselves once more assembled in a fraternal reunion. This is our fifth meeting as a regimental association since the days when we were called together to form the ranks of the gallant Third.

I feel indeed very grateful to the God of all battles for giving us so many victories which are now part of the nation’s history. To me it is clear that the Divine hand has been with us as a Regiment from the days when we were mustered in at Fond du Lac until the 18th of July, 1865, when we were mustered out at Louisville, Kentucky.

I feel proud of our achievements. The heroic deeds of the Third Wisconsin; are they not written already in the Chronicles of the Kings? And the names of our dead, are they not already inscribed on the imperishable Roll of Honor? The familiar saying of the Scriptures does not apply to us. “Let him not boast that girded his armor on as he that layeih it off.” Comrades, we have worn our armor like soldiers. We did not lay it off till the fighting was done. We did something that few regiments can mention, namely: we actually wore out our pants, coats, buttons, guns, bugs, fleas, rebels and two stands of colors all in the Carolina rice swamps. Our armor was worn out, not rusted out, nor laid aside. February 27, 1864, a Company inspection was held near Winnsboro, South Carolina, and our Regimental history gives this picture of our condition: “But the marching columns were never in a more complete uniform—of mud. Without soap day in and day out, without change or wash they struggled on. Lucky was the soldier who found time by some early halt to boil out his clothes, so that he might be the only inhabitant of his shirt. The company inspection showed the Third Wisconsin, and it was a tidy regiment comparatively, to be in a ragged state. Some were nearly barefoot; some had one leg to their trousers; some had tied patches on with strings; and some with invention born of old mother necessity, had stuck the patches on with pitch; while some had only fragments of shirts. The service had been hard on clothing, for marching in mud, standing about fires, carrying logs, lifting wagons out of quagmires, day after day, garments fell away in piece-meal.”

It is enough for us to look at that picture of bravery and suffering and lofty patriotism, to say that you and I were there! Yes, comrades, we marched and campaigned together till we seem to be brothers of one family and children of one mother. Our sufferings, hardships and bitter trials at Cedar Mountain, Antietam, Chancellorsville, Beverly Ford, Gettysburg and other hard fought fields, has made us one forever. On this occasion, which calls forth expressions of cheer and congratulation because so many of us are gathered once more, under one flag and of one mind, let us repeat again the words and songs that cheered us around the old camp fires.

Indeed, our cup of joy would well nigh overflow were it not for the recollection that some of our brave comrades are unable to be present because of wounds and infirmities, the results of hardships endured on southern battle fields. Then again others are not here, because they sleep beneath the shade of the Georgia pines, or on the slopes of Cedar Mountain, or along the banks of the winding Potomac and Tennessee. Once they were full of hope and life; they took the farewell look toward home when they passed through the gate into the lane that led to the city beyond; they threw back a tender good-bye, just as we did, dear comrades. Oh, what pen can portray the feelings in those homes to which some of our brave boys never returned! Finally came the welcome home of the Regiment; some of its brave members, alas, remained behind, a kind of hostage in the land we conquered. Comrades, I have come to those years of reflection that lead me to study the causes and results of great movements of men in fields of civil strife. Providence is working a greater plan through the actions of men than we, the actors, may be able to discern. We turn over pages of our history and see the rescues we have made, the unflinching courage displayed, and the many times in which it seemed that the fate of the Union cause depended on the prompt action of the invincible Third Wisconsin. Never will we know how much we really contributed to the cause of the Union and the freedom of five million blacks!