The Voices of Fredericksburg 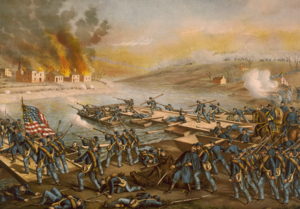 The battle took place in and around the town of Fredericksburg from December 11-15, 1862. Union Major General Ambrose E. Burnside maneuvered his army near the town and awaited the arrival of pontoon boats to cross the river. During this critical delay, Confederate General Robert E. Lee’s Army of Northern Virginia dug in on the high ground outside of town and awaited for a battle that Burnside would surely be forced to take. Burnside wanted to somehow get below the city, move his army across the river, and force the Confederates to give up their excellent defensive position. However, that would prove impossible and facing scrutiny from Washington if he failed to act, Burnside crossed the river, took the town, and charged aggressively up the heights in a direct assault on Lee’s formidable defensive position. The result was a decisive defeat for the Union. The following are some descriptions and reactions from Union and Confederate soldiers:

Alfred E. Waldo served in the 35th Massachusetts Infantry and noted on November 25th, 1862 that they were in position next to the Rappahannock, “Fredericksburg, Virginia which is quite a city lies the other side of the river and is in the possession of the Rebels. Our pickets are on side of the river and theirs on the other. They talk to each other. The rebels ask our pickets how we like bull run and our men ask them how they liked Antietam & L. Mountain. Yesterday morning we moved about 1 mile further back. They say that we are going into winter quarters here but I do not know whether we shall or not.”

Tally Simpson, 3rd South Carolina Infantry, writes from the battlefield on Christmas reflecting on the war thus far and the battle: “We went on picket in town a few days ago. The pickets of both armies occupy the same positions now as they did before the battle. Our regt was quartered in the market place while the others occupied stores and private houses. I have often read of sacked and pillaged towns in ancient history, but never, till I saw Fredricksburg, did I fully realize what one was. The houses, especially those on the river, are riddled with shell and ball. The stores have been broken open and deprived of every thing that was worth a shilling. Account books and nots and letters and papers both private and public were taken from their proper places and scattered over the streets and trampled under feet. Private property was ruined. Their soldiers would sleep in the mansions of the wealthy and use the articles and food in the house at their pleasure. Several houses were destroyed by fire. Such a wreck and ruin I never wish to see again.”

Edward R. Miles, 100th Pennsylvania Infantry, wrote homme: “Well, Hannah, the war was raging at its utmost point the 11th of this month. If you had a been as close as I was you would have thought that the world was coming to a close from the noise of the cannon’s roar. Well to tell the truth it did not sound wholesome at all to my mind butt I might have been out of my head however. Well they cannonaded from 6 o’clock in the morning until about 9 at night before our men could cross the bridge. They got the Pontoon Bridges across about 4 o’clock in the afternoon and then we went back to our camp and stayed over night and then we started the next morning and went over to town butt when we got there the houses was so badly shot up that we could not see the town at all. It was just the leavings of the houses that we saw and no more for every house that was not burnt was full of holes that it was worth nothing at all without minding it up. Well we laid along the river that day and a long towards night the Rebs threw some shells in our ranks but they did not hurt any of our company. There was a piece of one cut a hole in Jim McCune’s canteen and let the water run out of it in a hurry. Well we lay in the houses that night and had fires in their fireplaces. The next (day) the fighting begun about day light with infantry and they kept it up study all day and until about 11 o’clock at night before they quit it. Our regiment was supporting a battery where they was afraid of the Rebs flanking our men and we was in a position that we could see the whole fight. On our right that is where the 134th went in and got cut up. Well they did not fight much more after that day. Well we could not drive the Rebs back with out loosing more men than they wanted to loose at the present so the next job was to get back across the river but we got that little job done nicely and made good our escape from the bloody Rebs who seeks whom they may devour somebody and will quit this song for it is getting to be an old song to me and I would not care how soon they would quit it for my part.”

William H. Houston of the 24th Michigan was camped near the battlefield months later and noted with disgust, “We are on Picket a little below Fredericksburg and precisely the place where old Burnside crossed last fall and it makes me angry every time I look at the place to think that so large a army as he had that he had to skedaddle back in the night.”