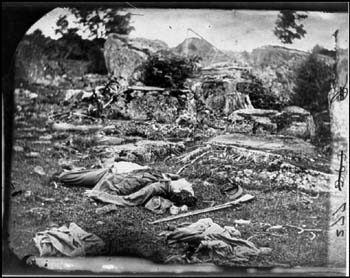 [This is a continuation of Nathaniel Rollins’ diary entries for Gettysburg, here and here]

As the sun crept over the fields and mounds outside of Gettysburg it became apparent to the Confederates that the Union army was dug in on the high ground. The Union army had established strong positions in a giant U-shaped defensive line stretching from Culp’s Hill to Cemetery Ridge. After some initial probing it became apparent to Robert E. Lee that the Union right was firmly grounded, however, their left was up in the air and not anchored in any meaningful way. Therefore, Lee directed General A.P. Hill to continue to offer up a presence in the center while General James Longstreet’s Corps moved into position to attack the Union left. In order to occupy the Union’s right, General Ewell’s Corps would attack in a feint.

At the end of the first day it was reported that “the Iron Brigade, then reduced to the size of a very small regiment, was placed in position on Culp’s Hill to the right of the Baltimore Pike.” (Lieut Cornelius Wheeler)

The2nd Wisconsin lost 233 of 302 engaged, many captured including Nathaniel Rollins, and were not combat ready for the remainder of the battle. Rollins discussed the Confederates wanting to parole him and others. This means to vow not to fight again in return for parole or freedom. Rollins would refuse and spent the rest of the war in a POW camp. Rollins identified correctly the time of the attack on the Union’s left flank. At 4 PM, Confederate cannons opened fire from Devil’s Den to the Peach Orchard. General John Bell Hood’s men swung eastward toward Devil’s Den while fighting erupted in the Wheatfield, at the Peach Orchard and on the slopes of Little Round Top. All of these places would soon become the stuff of legend.

July 2d: This morning we woke at day light and until near noon were kept at the same place, when the rebels removed us to a field nearly west of the town in rear of their army. Here an officer came to us from Genl. [Robert E.] Lee wishing us to all accept parole but inasmuch as Gen. Halleck had prohibited paroling on the battle field, we didn’t conclude to accept. The rebel officers seeing that most of the officers with us were discouraging the enlisted men from taking parole, separated the officers from the men and after that would not permit us to communicate together. At 4P.M. the battle opened vigorously on both sides and continued with terrible fury until 10 at night During the fighting, Genl. Chilton of Lee’s staff came out to have us paroled but they showed too much anxiety for our comfort in this respect to look honest. This evening they promised us some rations but gave us none. Most of the officers have treated us gentlemanly.