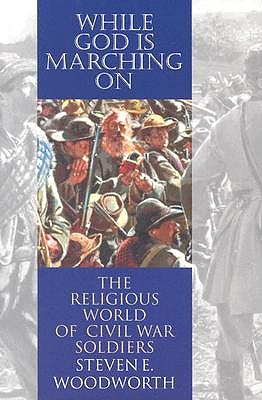 Unfortunately, the spiritual world of the Civil War soldier with regard to his religious beliefs has not often been the focus of historians. This is for various reasons and unfortunately many of them political; which I will not get into. But for a few exceptions before 2001 [Charles Reagan Wilson’s Baptized in Blood (1980); Randall Miller, Harry Stout, and Wilson’s Religion and the American Civil War (1998); for example] few modern era Civil War historians thought religion worthy enough for study, it seems, let alone gave it much thought when they discussed or analyzed Civil War soldiers as people.

However, I need to get off my high horse as I myself have not given the topic much consideration or study and certainly not here on Soldier Studies. My intellectual relationship and discussion with Civil War era historians has never motivated or provoked me to explore the religious aspects of Civil War soldiers. It simply never occurred to me.

I am not a highly religious person and do not attend church; at least not very often. I have read countless letters and other correspondences where soldiers have eloquently and passionately brought up: God, Providence, Salvation, Sacrifice, and on and on… Yet never did I investigate the depth and width of religious participation and beliefs on the part of the soldiers. I hope the reason is, well, that it was self-evident to me that they were highly religious. I am not one who tries to deny the roots of Christianity in the history of America; including the founding of this nation.

So when I came across Dr. Steven E. Woodworth’s study While God Is Marching On: The Religious World of Civil War Soldiers, I was fascinated and immediately purchased the book. Today having finished the study I felt truly embarrassment that I had not already read it; and some anger that not one of my college or graduate school professors had discussed the central and important role religion played not just for Civil War soldiers, but for all civilians North and South during the era. Once again, I hope because it was self-evident and seemed too obvious to even cover!? [Note: yes I am speaking in generalities here I am sure you as an educator or professor do not skip or downplay religion in your instruction of the Civil War Era.]

One of the first things Dr. Woodworth does is place the centrality of religion within the historical context of the nation, writing: “Religion had always been important in the life of America.” Yet sadly, regardless of today’s teacher’s beliefs, the nature of religion and its role in American history is often forgotten: whether purposely or not, it being forgotten and left on the sidelines or even denigrated is often the case.

Woodworth briefly mentions the “myth” that propels people to falsely illuminate the “dominance of the Enlightenment” and its path of rationalism and deism as a major player in historical affairs on this continent. As Woodworth correctly notes, “[the] Enlightenment never held the sway in America that it did in Europe.” Our founding and establishment of government and justice have deep, deep roots in Christianity.

With regard to the soldier, religion informed and guided virtually every aspect of their lives including patriotism and political awareness. Soldier’s believed in “Providence” and God’s will, and prayed for strength and guidance from their creator in times of need and danger. Soldier’s prayed for the care of their immediate and future needs and when something good or bad happened they used religion and their relationship to God to explain and justify it.

Yet, too, the relationship soldiers North and South shared with God was not always easy. They had to find peace with the notion of killing, foraging, and destruction with regard to the teachings of a Christian life.

Simply put, While God is Marching On is a must for any serious discussion or study of Civil War soldiers; black or white. If this text/study is not included and not given thoughtful consideration than the historian of Soldier Studies is at best doing an injustice to the field; and at worst lying to their students about the true nature of the soldier of the Civil War.

While God Is Marching On
The Religious World of Civil War Soldiers
BY: Steven E. Woodworth