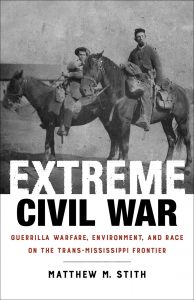 The Civil War as total war has been a topic of discussion on this blog and on many others; not to mention for a long time in publications and among historians. Though Mark Grimsley’s study The Hard Hand War, for me ended the debate over whether or not the Civil War can be classified as “total war” in the modern sense, Stith tackles the question in a  different way. Though Grimsley’s work focused on change over time and specific Union military policies, Stith here focuses on a specific region of the conflict, and a specific demographic. Though Grimsley’s work still holds the ground, Stith brings up solid points about how the war degraded into total war at times and washed up non-combatants in ways that can be classified as nothing less than total.

Stith’s focus is on the Trans-Mississippi and what is known as the “frontier” or the wilderness. This is a region that incorporates parts of Kansas, Arkansas, Missouri, and Indian Territory. Regions on the frontier where micro-battles occurred that, Stith acknowledges, were “civilian-centered” and often made no distinction between combatant and non-combatant.

The Trans-Mississippi region is one I am familiar with and one I have written much about. Stith tackles a section of it that I am not very familiar with and does so with vigor.  His study is visceral and thoughtful, and his research for the most part in-depth.  My only complaint would be more first hand accounts from soldiers and civilians. Overall Stith’s study presents a solid case that shows how hard the war was on civilians in this region, and as such is a must read for the Trans-Mississippi historian or any Civil War historian looking for something on the topic of hard war versus total war.

From the Publisher: “During the American Civil War the western Trans-Mississippi frontier was host to harsh environmental conditions, irregular warfare, and intense racial tensions that created extraordinarily difficult conditions for both combatants and civilians. Matthew M. Stith’s Extreme Civil War focuses on Kansas, Missouri, Arkansas, and Indian Territory to examine the physical and cultural frontiers that challenged Confederate and Union forces alike. A disturbing narrative emerges where conflict indiscriminately beset troops and families in a region that continually verged on social and political anarchy. With hundreds of small fights disbursed over the expansive borderland, fought by civilians—even some women and children—as much as by soldiers and guerrillas, this theater of war was especially savage.”