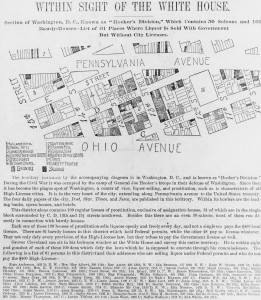 There is a map (held by the Library of Congress) that surfaced online recently that depicts Washington, D.C., and in particular the White House. It was noted that at one time, within sight of the White House there were 50 saloons and 108 ‘bawdy-houses’ (brothels) in the infamous Murder Bay neighborhood. It is taken from a newspaper clipping from the 1890s and can be found at Slate.

According to the map (unknown date of creation) the Murder Bay area was also known as “Hooker’s Division” as Civil War soldiers assigned the job of defending the capital were for a time under the command of General Joseph Hooker, and they visited the neighborhood often.

Previous post: I was interviewed by Jane Johansson for her The Trans-Mississippian Blog

Next post: The Free State of Jones Movie Strikes Controversy