Should the Civil War Death Toll be Reconsidered?

Our understanding and interpretation of the American Civil War relies partially on the death toll. Indeed, with regard to most conflicts the death toll is usually one of the first facts (data) that is discussed.

The true death toll of the Civil War has been the subject of debate throughout the years; as well as on numerous blogs and websites including on here. Recent studies have determined that we probably have “undercounted the dead by as many as 130,000.” Still others say the true toll should be even higher if we count civilian deaths due to famine and disease as a direct result of the war. So how should we count the dead and should we reconsider the variables?

“The Civil War left a culture of death, a culture of mourning, beyond anything Americans had ever experienced or imagined,” says David Blight, a Civil War historian at Yale University.(BBC) Indeed, the assumption is that the war created this culture of death and cast a long shadow on future generations.

However, Nicholas Marshall yesterday discussed the Civil War death toll and had a little different take on it. Marshall wants us to “work from an assumption that deaths from disease were not viewed at the time as war casualties.” That disease was already a large factor and that death was already a part of the “culture of mourning,” if you will. That “Americans viewed disease — and the death that came with it — as a constant.” 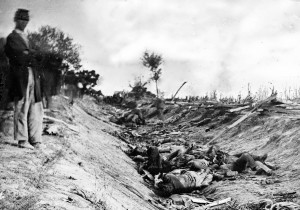 So if we take out disease, as Marshall suggests, “instead of 750,000 casualties faced by Civil War-era Americans, we are left with 250,000.” A significantly reduced number but more importantly it radically changes our perception of the war.

So regardless if you think the casualty rates have been miscounted or misinterpreted, there still is room for discussion and the death toll does still have an important place in our understanding of the war.

Next post: I was interviewed by Jane Johansson for her The Trans-Mississippian Blog