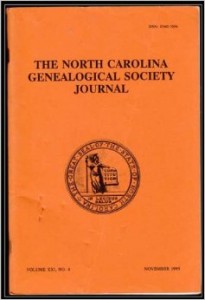 Finally received my copies of the February 2014 North Carolina Genealogical Society Journal which published my article “The Confederate Attack on Washington, N.C.”

In it I explore the nature of urban combat as the sacking of Washington, N.C. was one of the earliest known examples of fighting that involved citizens within a city who not only were victims, but took an active role in the engagement in some instances.

The fight represents a contrast to the “hard war” that we have come to associate with the Civil War at a later point. In Washington, N.C., September 6, 1862, the fight is significant not because of who won, or what happened, but for did not happen. Anyway, always an honor to have something accepted and published by an academic publication!

Next post: Should the Civil War Death Toll be Reconsidered?