“Shook Over Hell” Post-Traumatic Stress and the Civil War 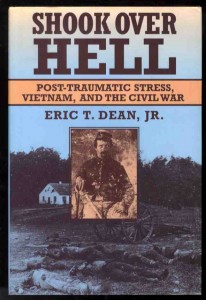 In his 1998 review of Shook Over Hell: Post-Traumatic Stress, Vietnam, and the Civil War (by Eric T. Dean, Jr.), James M. McPherson declared that the work “breaks new ground in its analysis of the psychiatric casualties of battle.” Yet since the book’s publishing it has been vastly overlooked by social historians. When researching Civil War historiography one rarely finds Shook Over Hell mentioned when assessing the soldier.

Though McPherson covers the Vietnam analysis of the book in his review, I will forgo addressing Dean’s dismantling of several key myths about Vietnam soldiers after the war (turns out there were not massive suicides, criminal activity, and joblessness, ect.) Instead the focus is on Civil War soldiers after the war; which is an area Dean correctly cites as being in need of study.

With this in mind Dean analyzed the fate of 291 veterans committed to the Indiana Hospital for the Insane. Dean discovered, among lots of other things, the following:

Civil War veterans languished in soldier homes, insane asylums, and some drifted or headed west to get away, while others simply floundered in obscurity and poverty. The point of all this is the study of the veteran after the war has to be further engaged! What percentage of veterans suffered from PTSD like symptoms? How many were able to return to their homes, the field, the shop, the factory, and pick up the pieces of their lives and carry on? How many saw their personal lives fall apart, and why? And the questions could go on and on…

Dean also looked at pension records and found that it was very difficult for a soldier to file an “insanity” type claim. There simply was not a widely accepted definition and diagnosis for discovering such mental conditions (such as PTSD). We know that during the war it was seen as a defect to suffer from nostalgia or other signs of mental breakdown.

The fact that the Civil War soldier faced a longer and more grueling service (than Vietnam veterans) of countless campaigns suggests that the number of veterans impacted to the degree of being incapacitated in some way, is significant. However, records will be hard to come by. Insane asylum records are problematic and often have to be cross checked with service records to verify a patient was indeed a soldier. As historians we can imagine the difficulties within this alone.

Dean’s book is indeed “groundbreaking” and his call for further study of the soldier after the war important. And Soldier Studies is pleased to say that we know of several studies that are taking place right now! We hope to share some of these with you during the coming months!