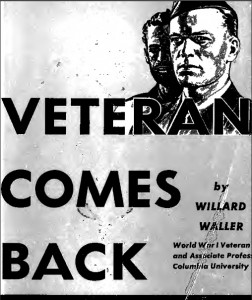 During some research today came across this nugget of a quote from Nathan Bedford Forrest who clearly had “no moral scruples against slavery,” when he apparently stated during the war “If we aint fightin’ fer slavery then I’d like to know what we are fightin’ fer.” Turns out not to be an unknown quote, but where I found it was in the book Veteran Comes Back, by Willard Wallard published in 1944. The focus of the study is of course on WW2 veterans that were returning home. Mr. Wallard first pithily discussed previous war veterans and for the Civil War he focused on Confederate soldiers and their plight returning home. Wallard wrote,

The entire South was the “Invisible Empire” and the Grand Wizard the supreme head, and under him were lesser officers: Grand
Dragons, Grand Titans, and Grand Cyclops. The Klansmen called each local chapter a “den” and themselves “regulators.” Force and
violence were part of their methods though they were rarely if ever
convicted of crime but they preferred to rule by terror where they
could. While their ritual and mumbo-jumbo helped greatly in subduing
the ignorant and superstitious Negroes, without the driving
force and organizing ability of such men as Forrest, the counterrevolution
would certainly have failed.

Indeed, without the Klu Klux Klan and Nathan Bedford Forrest the redeeming of the South might not have happened so effectively and quickly. Though repugnant in its essence, the author does bring up an interesting point in the difference between the post-war period for veterans, noting,

After the Civil War the soldiers of the Union furnished the
dynamic element in the politics of the era of good stealing. Republicanism,
Protectionism, and Pensionism became the objects of their
emotional and political attachments. The Republican Party and the
Grand Army of the Republic were their organizations that worked
hand in hand for pensions and tariffs. The energies of the returned
soldiers were thus allowed to come to expression without greatly
disturbing the status quo in the North.

Maybe some more on this later when I get a chance… maybe not!?