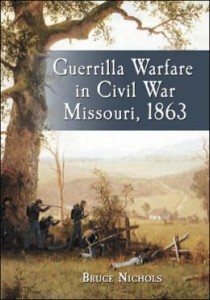 Bruce Nichols is a defense analyst and Civil War Missouri historian and this is his second book on “Guerrilla Warfare in Civil War Missouri,” his first was released by McFarland in 2004. Combine the first two volumes (a third is coming) and they thus far offer a thorough study of all known guerrilla operations in Civil War Missouri from 1862 to 1863. Nichols book is not so much an analysis or synthesis of guerrilla warfare, but more a wide and far reaching look at all guerrilla actively in a blow by blow presentation. Nichol’s does come to two valid conclusions: that guerrilla activity occupied a lot of Union resources and contributed to them never being able to completely control the state. However, if you’re looking for more analysis the books might not deliver what you want. Still, the research is exhaustive and virtually every guerrilla/ bushwhacker event is covered as well as what the Federal reaction was in many instances. Thus far the two books are a great resource to any historian who is in need of an extensive collection of data regarding guerrilla and partisan activities in Missouri.