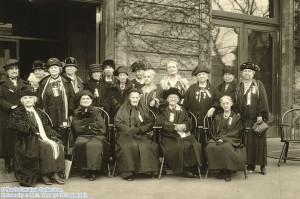 The following was presented during the 1906 (16th annual) reunion for the 3rd Wisconsin Infantry. I found it interesting in several ways: the mention of “old glory” and not the confederate flag; North and South finally “are getting together” (its 1906); mention of the “lost cause” myth; the Daughters of the Confederacy apparently has never changed (the soldiers who encountered Southern women during the war called them “she-Devils”); carpetbaggers were everywhere!; and finally, obviously no mention of the plight of blacks within Southern society. Anyway, hope you find it interesting as well!

EXPERIENCES IN THE SOUTH.
BY COMRADE ADD A. TOWNSEND.
Comrades Ladies and Friends:

A few days ago I received a letter from our esteemed Secretary requesting me to prepare a paper to be read at our campfire, and suggested that I take for my subject my recent experience in the South. While many may be familiar with the conditions existing in the Southern States prior to and since the war (and doubtless some here to-night, like myself, have been in the Southland since that memorable period) yet some of you may be interested in a brief description of affairs down South as they exist to-day. I have spent the last five winters in the States of Alabama and Mississippi, and am pleased to say that the North and the South are getting together, as the saying goes, and the Yankee is no longer regarded by the Southern people as an enemy, but is respected and trusted, and whose presence is at all times acceptable. That country now known as the New South, so called by reason of the great changes that have taken place mostly during the last decade, is due, no doubt, in a large measure to the Spanish-American war. “Old Glory” is now accepted as the flag of our Nation, and the people of the South, with but few exceptions, regard it as such. While in the South I have met and talked with hundreds of old Confederate Veterans, and have never met one who exhibited in the slightest degree any feeling of hate or disrespect. At Citronelle, Alabama, the Union and Confederate Veterans, have formed an association known as the United Veterans Association. Meetings of the same are held which are quite well attended and very interesting. At these meetings both sides of the late unpleasantness are freely discussed. We have campfires and banquets, and I could read to you extracts from the local newspaper to verify what I have said as to the existence of brotherly love.

The only feature while in the South that is in any way unpleasant to me and to others of the North, is the attitude of the Daughters of the Confederacy toward the Union Veterans, in particular. That society being an auxiliary to the United Confederate Veterans, some of them overstep the bounds of propriety in a desire to show their loyalty to the lost cause. When a Union Veteran, wearing the Bronze Button meets one of these women she makes no effort to conceal her contempt and dislike for us. Occasionally a young man will say something to make us straighten up and pull down our vest. However, I believe the day is not far distant when these unpleasant features will no longer exist, for the South is fast filling up with Northern people and Northern capital, and things seem to change in every phase.

In Citronelle, Alabama, where I spent the last two winters, almost every business man is from the North. Even the Postmaster is a Northern man. The principal industries in that particular section is truck farming, and it is done mostly by men from the North. The fact of the whole business is, if it were not for the immigration into that country from the Northern States, the changes for the better would be very slow. I enjoy the Southern winters and intend to make it my winter home as I can afford. Twenty-six Union Veterans spent last winter in Citronelle. This city of 1000 population is 32 miles north of Mobile, Alabama, and is a lively station on the Mobile & Ohio Ry. It is 365 feet above sea level, Mobile being 12 feet above. The air is fine and pure, and the water is perfect. It has a Chautauqua Auditorium with a seating capacity of 2500, and they hold what is known as a Winter Chautauqua, usually beginning in February and lasting about a month. The very finest talent is employed and the patronage is good.

The country around Citronelle was at one time, and not long ago, a vast forest of pine timber, but it is now falling before the ax and being worked up into lumber and sold in Porto Rico, Cuba, South America and Holland, very little going north. Southern Alabama is destined to become one of the greatest winter resorts in the South, even now it is quite difficult for tourists to find accommodations at Citronelle. Many leaving the train there are compelled to go to Mobile on the following train. Wish you could all share with me an Alabama winter, where roses bloom through the winter. We there have constantly every vegetable, fresh from the garden. Strawberries come in March and peaches in May. I have seen oats cut in May. If any of you, my comrades would like to escape Wisconsin’s chilly blasts, write me, and I would be only too glad to tell you all you wish to know as to how to get there and any information you may wish of that glorious country.