This was done by an Alligator 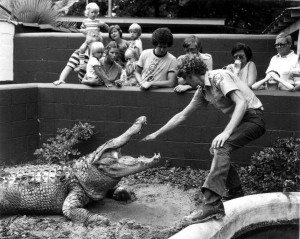 Whenever I watch Swamp People I think back to the Civil War soldier trekking through the swamps and bayous of Louisiana or Mississippi and wonder how often they encountered alligators? I know, there are a ton of more educational topics to discuss — who cares, my blog!

Alfred E. Waldo and his fellow 35th Massachusetts Infantry members arrived at Vicksburg, MS, on June 16th, 1863 during Grant’s siege of the place. After arriving a few of his comrades decided to visit the Yahoo River. Waldo wrote that they “went into the Yahoo river the other day and one of them was bit into in the middle of his body and one of them had his arm bit so it had to be amputated and the other one has not been heard from since. This was done by an aligator.”

Rufus Jones of the 8th U.S.C.T. thought Florida to be the most beautiful place he had ever seen, with the “exception of the prospective crop of the Alligator family, and flourishing condition of the reptile kingdom, I should prefer making Florida as my future home.”

Soldiers from states such as Iowa and Wisconsin were sometimes wholly ignorant as to the lethal nature of the creatures, one soldier with the 8th Wisconsin even declared that “These hideous looking monsters are said to be harmless and will not molest anyone unless in self-defense.”

In Arkansas one was even captured and “brought in under a strong guard, and delivered up as a prisoner of war” to be displayed at the camp headquarters.

So let it be known that it’s actually fairly common to read about soldiers in the Trans-Mississippi region encountering alligators and writing about near misses or the maiming of comrades.

Next post: New Letter: Know that we are trying to do our duty to the best of our ability