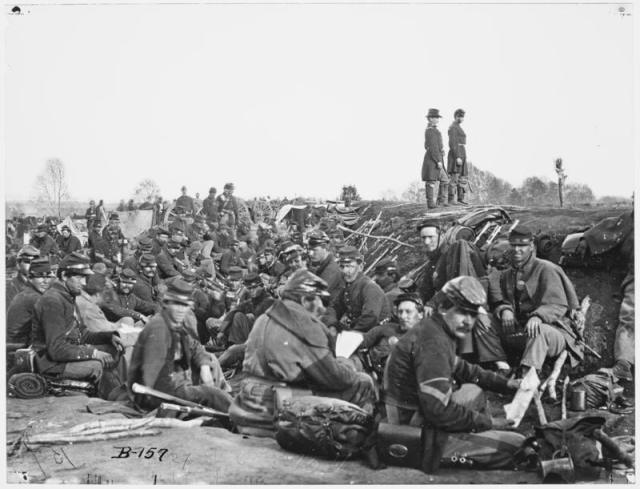 Major General Joseph Hooker actually had a pretty good strategic plan in place before the Battle of Chancellorsville. He intended to secretly march part of his army northwest, cross the Rappahannock and attack Lee’s rear. Meanwhile, with Major General John Sedgwick and his 30,000 men at Fredericksburg, Hooker intended to hit the Rebels with a large double envelopment. He also initiated a cavalry raid (Major General George Stoneman) to Lee’s supply lines to prevent reinforcements.

Though a solid strategic plan, the tactical execution aspects of the campaign would be indecisive. In the end it would be General Robert E. Lee sending Lieutenant General James Longstreet’s First Corps around in a brilliant flanking maneuver that would roll up Hooker’s line and nearly result in a rout.

The following are some excerpts of letters found in the Soldier Studies database.

We have had the hardest fought battle of the War and gained nothing but suffered defeat with a terrible loss of life and property. The enemy’s loss must have been greater than ours as they made the attack. I am as well as could be expected considering the physical, mental and nervous strain that I have passed through. I have seen all that there is of war; I have been well initiated having been under fire for three consecutive days. It is very lonesome for me, there are so many of the men missing, some never to return.

This was our first under fire and the men showed no fear. Of course we had to all make a bow when they passed over our heads but if the battery had stood its ground we certainly would have captured it. We guarded this road until the wagon train had passed, then joined the Brigade. The 28th Penna. Regt. had a skirmish with the cavalry and lost one man (killed). Where we had the skirmish was on the Wilderness road. We marched until five o’clock, then went into Camp near Chancellorsville, about seven miles from Fredericksburg, Va. Chancellorsville proved to be the battleground. Our fifth day, May 1st, we did not move until 12 o’clock M., when we made a reconnaissance to the east of the Chancellorsville House about two miles and was here under the fire of a battery. It being so far away we could not return it, we were ordered back to where we had camped the night before. At four o’clock P. M. we were attacked by the Rebel infantry. Lieutenant A. T. Mason with Company A, Lieutenant Marcus Beadle with Company I, and Captain Orin S. Hall in command, assisted by Adjutant Geo. H. Wallace, were sent out in our front to establish a picket line. The right of this line was to rest on the Spottsylvania Court House road and extend through a piece of woods and cleared field to a tobacco house on the east, which was the left of the line. Lieutenant Beadle had passed along to the left of the line and had posted his men. Capt. O. S. Hall was at the extreme right of the line and had inspected it, while Lieutenant Mason and his company were in reserve to support either part of the line. The line had only been established when the enemy’s cavalry made an attack on the right of the line and drove in four picket posts. Captain Hall had extra men with him and commenced reforming the line and placing his men closer together to strengthen it when he saw the Rebel infantry advancing in line of battle. Lieutenant Mason with the reserve hearing the firing went to Captain Hall’s assistance and was placed in the center by Adjutant Wallace who was mounted. The pickets held their ground as long as they could but were soon driven in. The Regiment, hearing firing on the picket line, received orders to advance and pushed forward over a fence where we were exposed to the sight of the enemy, when they opened fire on us. We could not see the enemy in the woods and did not fire on them until we had taken position on the top of a cleared hill in sight of the enemy, when they came to the edge of the wood.

Next day we marched on again, and noon found
us at Chancellorsville, a big brick house in a field surrounded
by a wilderness of woods. Here we halted and spent the
night, and here the great battle of the war was fought.
Friday morning our brigade made a reconnoissance towards
the Rappahannock. On the road we found a newly
deserted camp with tents all standing, and in it some of
the French knapsacks and muskets we lost at Games’ Mill.
We returned in the afternoon and there was some skirmishing
with the enemy. Saturday was spent in building breastworks,
and in the afternoon the rebels arrived. They attacked
our lines furiously in the center, but were repulsed.
At first the Eleventh Corps (Sigel’s Dutchmen) gave way,
and Sickles’ division (the one Alf is in) was sent in.
They drove the rebs back and held them. At night we lay
on our arms behind our works. The moon was full and it
was almost as light as day. Six or seven times the attack
was made in the same place and every time repulsed. It
was an anxious night, for the morrow all felt sure would be
a bloody Sunday, and so it was. We were up at light and
moved off to the right of the center, and immediately went
to work building breastworks. Just as the sun came up the
enemy came on. Their whole army was massed on half a
mile of our center, and Jackson told his men “they must
break our line if it killed every man they had,” but we were
prepared for them. Our first line in front of the works
was overpowered and driven in, and they rushed on. Artillery
and infantry met them. Protected by their breastworks,
our men poured it into them. Grape and canister
swept through their columns, mowing them down. Still,
on they came, like a vast herd of buffaloes, struggling over
the trees and brush, dashing, brave, impetuous, but doomed
to destruction. Thousands of them charged right up to our
works, but, the line shattered, comrades killed, they could
do nothing but throw down their arms, retreat being impossible.
For six hours they persevered and then withdrew.
You must imagine the scene — I cannot describe it. The roar
was unearthly ; there is no better word for it. I shudder at
the slaughter. Ours was fearful enough, but a drop in
the bucket to theirs. Source: http://www.soldierstudies.org/index.php?action=view_letter&Letter=760