New Letter: Know that we are trying to do our duty to the best of our ability 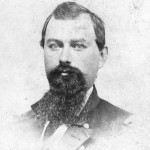 Charles L. Harris, born August 24th, 1834 in Bridgeton, New Jersey, was a prominent Madison resident when the war broke out. He immediately enlisted and became a Lieutenant in the First Wisconsin regiment. Three months later he welcomed the rank of Colonel in the Eleventh Wisconsin, at the age of 27. A confident man of medium height (he stood 5’8”), Harris was well educated, having graduated from West Point, and considered a career in the military, but chose to study law. He was also ambitious and had an early interest in politics. When war broke out the opportunity to defend his country and advance his political career must have made Harris’ enlistment an easy decision.

After the war Colonel Harris headed west, like many other Civil War veterans, and settled in Cedar County, Nebraska, where he worked as a lawyer and merchant. Interestingly, his loyal and trustworthy Captain, Jesse Miller, followed him to Nebraska. Harris used his Civil War accomplishments to further his interest in politics and became a Nebraska State Senator. He and his wife Mary had two children, a son and daughter. The colonel died tragically after an automobile accident in Omaha. He was a passenger in a vehicle that rolled over. Though trapped for a period of time under the automobile, he was released and seemed in good spirits, save for some scratches and bruises. But unfortunately he had internal bleeding and soon after went into shock, and a week later, on October 11th, 1910, at the age of 75, passed away.

Next post: Milliken’s Bend A Civil War Battle in History and Memory