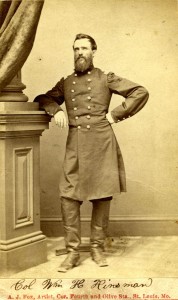 After his smashing defeat at Champion’s Hill, Confederate Lt. Gen. John C. Pemberton decided one last time to stop or at least slow Maj. Gen. Ulysses S. Grant’s advance on Vicksburg at Big Black River and an important bridge that resided there. Brigadier General Michael K. Lawler’s Second Brigade (21, 22, 23 Iowa, 11 Wisconsin regiments) was first on the scene and positioned at the extreme right of the line and in excellent position to launch an attack. It would be Kinsman who volunteered to led the assault.

The 21st and 23nd Iowa regiments lead the charge, supported by the 22rd Iowa and the 11th Wisconsin.

According to reports, they would emerge from the woods and rush across the wide field, taking fire most of the way. Each regiment was staggered along the tree line, the farther down the greater the distance to travel. It was discovered that there was a gap between two adjacent rifle pits. This presented an opportunity if they acted swiftly. Using the floodplain, they would charge obliquely across the field taking fire from two sides (right and front) in an attempt to enter the end of the rifle pit below the swamp. There the men would have to wade through the muddy swamp, then climb the small embankment and attack the rifle pits

Though reports suggest that the floodplain provided perfect cover and allowed Lawler to move up close to the Confederate position without incident, First Lieutenant Hiram J. Lewis of the 11th Wisconsin, suggest otherwise:

“There was an open field of 3/5 of a mile to pass over offering nothing to shield us from the bullets of the enemy. Nothing could be seen of the rebels but their hands as they raised to shoot… It was the greatest foot race I ever witnessed.”

Writing later, the 11th Wisconsin regimental historian noted that the attack was so “sudden and unlooked-for that the Rebel fire was not given with such destruction” as they had expected. What they, and Lawler, did not realize was that Pemberton’s army was not only hopelessly outnumbered, but demoralized. When the charge was made many Rebels decided they had seen enough. The Missourian and Arkansas troops facing Lawler managed only one or two hasty volleys before fleeing. “Our troops were completely surprised,” said a soldier with the Twenty-first Arkansas, “ [They] were really surrounded before they knew it.”

The attack was so sudden they took 1800 prisoners, but during the assault the hero of the day was hit several times. “[Kinsman] Struggling to his feet, he staggered a few paces to the front, cheered forward his men, and fell again.” Numerous shots went clean through, mortally wounding him. “A murderous fire of shot and shell” slowed the advance, but did not stop it as “these brave men dashed on,” it was reported.

The Missourian and Arkansas troops facing Lawler managed only one or two hasty volleys before fleeing. “Our troops were completely surprised,” said a soldier with the Twenty-first Arkansas, “ [They] were really surrounded before they knew it.”

The attack so sudden, swift, and fearlessly executed that it opened the door to Vicksburg for Grant and his victorious army.