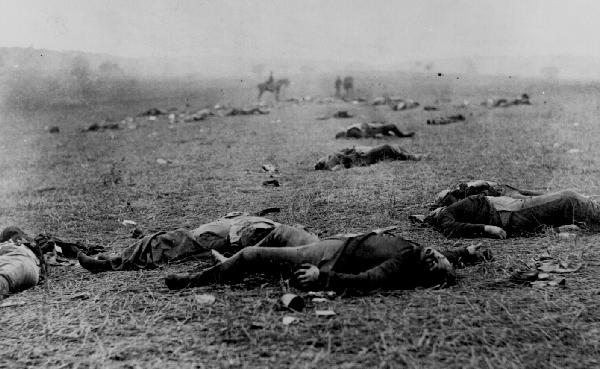 From what I can gather (discussed here and here) the main theme of the FCWH conference in Gettysburg was for a call to move our “public memory” of the war beyond a heroic understanding of soldiers and battle. I understand this mainly to be Battlefield Tours and such, as certainly within the classroom not a lot of this of this takes place from my experiences? Sure, for example, discussion about the 20th Maine Regiment, commanded by Col. Joshua Lawrence Chamberlain, and its heroic stand at the Little Round Top might be mentioned within the classroom.

But this is a good case in point, what kind of a “public memory” do we want without some regard for soldiers as heroes? I know, no one is calling for the “disregarding” of soldiers as “soldiers”. (But what exactly will be the result of “moving away?” And have we not already moved away from the soldier as a hero anyway?) And If a situation ever qualified as a “heroic” event during the Civil War, it was the 20th Maine, despite taking heavy losses, holding to protect the Union’s flank.

To me to “move beyond” means to once again de-emphasize the soldier as a fighting being and essentially to remove them from an historical understanding as “soldiers” — and some who indeed sought to be heroes.

I read today here that one historian thinks it “unfair for civilians to think of soldiers as heroes…” And instead it was “more appropriate that soldiers be viewed as survivors of a great disaster like a mine collapse or a burning building.”

I understand the attempt at establishing cause and effect as being related. A Miner chose to be in the mine, a Person in a building, and then something terrible beyond their control happens and they react; or something like that. I’m sure there are more nuances that I was not privy to at the conference.

Regardless, overall to me this is absurd. A Civil War Soldier, generally, had a different value system (just to enlist) and ideological make up to volunteer and go fight: Union, Save the Nation, Defend My Home, ect. Sure some did it for the paycheck (how many of these actually sustained and fought it out? We don’t know. Which leads to lots of other questions, does it not?) Also, the actions taken by a Miner to save a fellow worker, are they not described as “heroic” and rightfully so?

To me, the whole “move the war beyond a heroic understanding of soldiers and battle” is an ideological move on the part of academics who do not truly understand, nor care to understand, the Civil War (or any war, for that matter) soldier as a fighting animal. (Which is one of many aspects, and all aspects we are interested in.)

Also, who goes to the Battlefield? What do they go there for and what do they want to learn about (once again I believe a lot of the Conference was about the battlefield experience)? Does that matter? It all really comes down to, once again, Who Owns History? The historian or the “public”? (I don’t know who the majority of these people are, thus my question marks!)

And finally, if this movement is an academic alternative to a supposed world where teachers are only teaching heroism, hero worshiping, and war glorification — I’d like to know where that is taking place in any significant degree? Do we simply have a straw man/horse here to knock over?

Previous post: Soldiering in the Army of Northern Virginia: A Statistical Portrait of the Troops Who Served

Next post: The Iron Historian: An Interview with Lance Herdegen