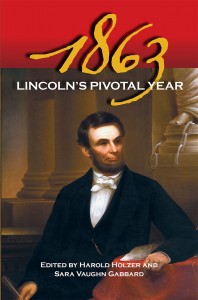 SIU Press presents a nicely constructed portrait of the year 1863 with regard to Lincoln’s presidency and the nation. The book consists of a series of essays written by some of the most well respected historians and is edited by Harold Holzer who is the Chairman of The Abraham Lincoln Bicentennial Foundation, and Sara Vaughn Gabbard who is the executive director of Friends of the Lincoln Collection of Indiana.

There are ten essays — not including a fine Introduction by Holzer — that guides us through what most historians would indeed call the “pivotal year” for Lincoln. A year that started with an historic first: the first executive act that targeted slavery. With the proclamation to essentially end slavery in the South, Lincoln had to maneuver through a political minefield with regard to how it was received in the North. In the eyes of some it shifted the aim of the war; and indeed it shifted the war from one of conciliation to one of total destruction of one or the other.

With the Emancipation Proclamation in mind most of the essays start with the opening of the year and move from there regardless of the focus. Indeed, it was a momentous year politically, but militarily as well. As Holzer notes, the political situation in the North “remains a particularly neglected subject” for the most part. As we known in places like Vicksburg and Gettysburg, 1863 proved to be significant if not decisive militarily.

The first essay kicks off the book (and rightfully so) with an analysis on how blacks received the proclamation and what it meant to them in MEDFORD’S “The Day of Jubilee.” The constitutionality of some of Lincoln’s actions during 1863 are to this day debated, and WILLIAMS’S “Under Cover of Liberty” deals with those issues the faced Lincoln; SYMONDS notes how Lincoln was a student of war, an amateur, but a studied one who learned about the nature of strategy and in particular the importance of the sea in his essay, “Lincoln at Sea”; SCHECTER neatly handles the divisiveness of the the draft and the resulting violence in “Military Drafts, Civilian Riots”; The fighting on land was not forgotten, and MARSZALEK and BALLARD do justice (though brief) to cover the major issues of the year in review; ZELLER handles images and photography in his essay “Picturing the War” and DAVIS offers a look at the leadership (or lack there of) during the beginning of 1863; BURTON revisits Lincoln’s “Gettysburg Address”; and finally, HOLZER wraps up the book with an excellent and interesting essay on Lincoln and his use of photography in “Seldom Twice Alike: The Changing Faces of Lincoln.”

As a history instructor I love these types of books because I can use the essays as secondary readings for my students. Overall an excellent book and well worth the time and money.

Only hours into the new year of 1863, Abraham Lincoln performed perhaps his most famous action as president by signing the Emancipation Proclamation. Rather than remaining the highlight of the coming months, however, this monumental act marked only the beginning of the most pivotal year of Lincoln’s presidency and the most revolutionary twelve months of the entire Civil War. In recognition of the sesquicentennial of this tumultuous time, prominent Civil War scholars explore the events and personalities that dominated 1863 in this enlightening volume, providing a unique historical perspective on a critical period in American history.

Several defining moments of Lincoln’s presidency took place in 1863, including the most titanic battle ever to shake the American continent, which soon inspired the most famous presidential speech in American history. The ten essays in this book explore the year’s important events and developments, including the response to the signing of the Emancipation Proclamation; the battles of Gettysburg and Vicksburg, and other less-well-known confrontations; the New York City draft riots; several constitutional issues involving the war powers of President Lincoln; and the Gettysburg Address and its continued impact on American thought. Other topics include the adaptation of photography for war coverage; the critical use of images; the military role of the navy; and Lincoln’s family life during this fiery trial.

With an informative introduction by noted Lincoln scholar Harold Holzer and a chronology that places the high-profile events of 1863 in context with cultural and domestic policy advances of the day, this remarkable compendium opens a window into a year that proved decisive not only for the Civil War and Lincoln’s presidency but also for the entire course of American history.

Previous post: The Iron Historian: An Interview with Lance Herdegen