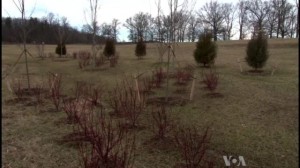 The war was fought between the states of the North – the Union, and the South – the Confederacy, which were divided over states’ rights, including slavery.

Now 150 years later, the soldiers who died are being memorialized through a tree planting project that will span four eastern states where many of the battles took place.

These are the faces of soldiers who were pitted against one another during the U.S. Civil War. More than half the soldiers died and most are no longer remembered.

Now the group Journey Through Hallowed Ground is keeping their memory alive by planting trees, or dedicating existing trees, to each of those soldiers.

Trees are being planted along a 290-kilometer road from Gettysburg, Pennsylvania – where the most famous battle occurred – to the home in Virginia of Thomas Jefferson, the third U.S. president. Beth Erickson is with the organization.

“Each tree is a life,” said Erickson. “As you see these trees one after another, it will truly make an impact.”

Next post: The Future of Civil War History and Soldier Studies