For Country, Cause & Leader, The Civil War Journal of Charles B. Haydon

For Country, Cause & Leader, The Civil War Journal of Charles B. Haydon, edited by Stephen W. Sears.

A resident of Decatur, Michigan, Charles B. Haydon enlisted in early 1861 during the first rush to “defend the colors.” He joined the Kalamazoo Light Guards and ended up with the 2nd Michigan Infantry, Company I. His diary/journal is one of the more lucid, vivid, and visceral accounts of the Civil War ever to be seen and I urge you to purchase it. Historian Stephen W. Sears, in his introduction to the book, noted that Haydon “kept one of the most striking of Civil War journals.” 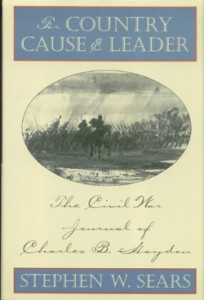 Haydon carefully documented the events taking place around him often touching on simple human events that very few Civil War journals capture. His regiment participated in the First and Second Bull Run, McClellan’s Peninsula campaign, and then Kentucky and Vicksburg; a very interesting trek for a Civil War regiment. Michigan was one of only a few states west of the Appalachians to send troops to both the eastern and western theaters. According to Sears, Haydon’s accounts of the Peninsula campaign are “the best single eyewitness account” to have survived.

Haydon was well above average intelligence for the time having attended four years of college and was a practicing lawyer. He spent his time in camp writing, noting the happenings of the day, reading the Atlantic Monthly, and surmising about the current state of affairs and what was to come. He was very much a “sophisticated” thinker.

For me, I saw in his entries the evolution of a soldier. The transformation of an intelligent Victorian era citizen to a refined military leader who studied tactics and desired more discipline in the army, especially after the first Bull Run.

Haydon enlisted before it was announced that they would have to serve three years. You have to remember that in 1861 almost no one thought the war would last more than a few months. He noted his reservations about this, “No man likes to see his occupation spoiled & war may very properly be regarded as the occupation of a 3 yr soldier.” Of course, he would stay on but his initial reasoning for doing so remains elusive, as several times he reflects on his patriotism and honor, but also the thought of what might happen if he returned home. “It seems to me that I cannot honorably do otherwise,” he wrote on May 11, “I should very much dislike to return to Kalamazoo in this juncture of affairs.” Just a day later he commits himself to staying on, “It surprises me to see how quickly I have fallen into this mode if life.” He begins to accept his fate, one in which he bluntly states his chances of survival, at best, “less than even.”

An American soldier was different, he noted, after an incident with a German captain, “there is a wide difference between German & American soldiers.” The German, Haydon thought, “holds [them] to military rules stricter than we are as yet accustomed to.” This is June 4, and his thoughts on this would change after Bull Run. Only a few weeks later in early July he observed, “They [Germans] seem to stand the campaign better than we.” Eventually Haydon would observe his own ability to stand long marches.

He was not one to be easily swayed by feverish patriotism. Yet as the war continued into its second year on July 4, 1862, during one of the bleakest times for the Union, he declared that he still “cheered most heartily for country, cause & leader.” He was clearly motivated by ideology to continue the fight.

Haydon’s story (and his journal truly reads like one) is the beautiful portrait of a “good” soldier, something in the end, after his transformation, he desperately desired to be remembered as.

The only disappointment with the book is Sears’ editing. His introduction was excellent and really set the tone for the journal. However, his editing is uneven and unbalanced. He will interject and tell us what battalion drill is and yet fail to insert the name of a soldier Haydon mentions to have “perhaps” died. Sears fails to look this up, which would not have been difficult. There are numerous other such minor occurrences not worth mentioning. However, there is a more serious omission I have to point out. Haydon mentions in August, 1861 about being offered a job as a “correspondent” for the Detroit Free Press which would pay him 2$ per column. He says, “I hardly know whether to accept but I think I will.” Sears meekly notes, “Apparently Haydon rejected this proposition. He makes no further mention of it.” Sears does not even bother, apparently, to go to the microfilm and look up some 1861 and 1862 issues of the newspaper and see if Haydon did or did not take the job. I assume Sears did not do this as he does not mention any kind of investigation. This omission frankly could be an explosive one as there could be more material that was not included in this book. It is not difficult to discover if Haydon took the job, even if he used a pseudonym. I had this exact same issue when writing my manuscript and all Sears would have had to do was compare writing styles if a correspondent from that regiment was found. If Haydon did take the job he would have often repeated himself in the newspapers from his journal entries.

Another thing, and the last issue I had, the index, which in most respects was fine. However, I have this complaint with a lot of journals and diaries that are published: they never include listings for things like “patriotism,” “secessionist” or other personal opinion and reflection. This index did not even include a listing for”Negroes” or his opinions about them, which he did indeed have. This could easily be done and help us social history people quickly find things related to his personal point of view.

Finally, I want to emphasize my hope that you will buy this book (click link above, you can get good copies for $3-$4 used as it is no longer in print having been published in 1993.) It is a must for your Civil War bookshelf.