A Leader of Soldiers 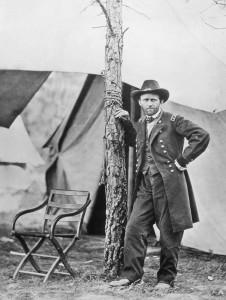 Ulysses S. Grant, of course, was a leader of soldiers. He was in many respects a simple soldier himself. I won’t say he would have been happy to have been a simple soldier in the Civil War; he was a driven man out to prove himself in 1861-62. Though I wonder if there were times in 1864 he wouldn’t have minded trading places with some anonymous soldier somewhere other than where he was? Perhaps not. But what I do know is that when Grant arrived to take over the Army of the Potomac in 1864 the battle hardened soldiers, having been lead by charismatic and gentlemen generals such as McClellan, were at first not impressed.

Grant in person was at times an odd display. He did not project himself like so many other generals did. He appeared to be awkward at times, nervous, and shy. The men of the Iron Brigade noticed and were not impressed with General Grant. Many of these men were from Wisconsin, Westerners like the general. At first glance he was, well, as he was, “a small man” as described by one Black Hat, with a “dark complexion, dark eyes” and most apparent he was “evidently” of a “nervous temperament.” 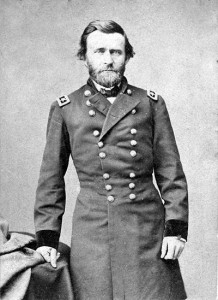 Upon his arrival Grant inspected parts of First Corps including the Iron Brigade, and the men were skeptical. They had already seen one Western general and did not care to see another. But nonetheless, here he was.

One Black Hat noted that Grant had a “slouchy unobservant way” about him, “with his coat unbuttoned and setting anything but an example of military bearing to the troops.” In other words, he was no McClellan!

Still another of the Iron Brigade thought the general unbecoming and untidy, “stumpy, unmilitary, slouchy and Western looking…” Here was the second coming of Pope some thought. A soldier from Indiana wrote that Grant was “sort of shy, half-embarrassed, half-bored” as he reviewed the men. A decorated officer of the Iron Brigade summoned up the first impressions of the awkward general: “he looks like a plain common sense man.”

Grant surveyed the soldiers and when saluted in solemn silence he realized that his presence was not all that welcomed. And it was then that the leader of soldiers showed his true character, “Grant took off his hat and made a slight bow.” These battle tested Westerners “understood the gesture immediately” and all along the line the regimental colors one by one dipped in mutual salute. Afterwards, the same unimpressed officer stated that “Grant wants soldiers, not yaupers.”

[The two photos of Grant are my favorite. One showing Grant in camp, relaxed and in his element, comfortable, with his hand resting on a tree. The other, more formal, and his expressions displaying the shyness mistaken for embarrassment and boredom the men noted; yet in there you can see the confidence of a leader of soldiers.]

All quotes from Lance J. Herdegen’s THE IRON BRIGADE IN THE CIVIL WAR AND MEMORY, 471-472.

Next post: The Demobilization of the Union and Confederate Armies