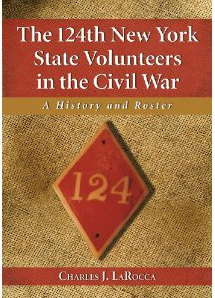 I just finished reading Charles J. LaRocca’s book The 124th New York State Volunteers in the Civil War: A History and Roster, (McFarland, 2012). An ancestor of mine, Charles Weygant wrote one of the better (19th Century) regimental histories in 1877 covering the regiment, but a modern updated history has been in order for some time and LaRocca nicely fills that need.

The 124th took part in the some of the toughest campaigns and fought in the some of the bloodiest battles in the Eastern Theater. As the author notes, the “12th New York was one of the great fighting regiments of the American Civil War,” and indeed it was. Primarily raised in Orange County, the regiment was known as the “Orange Blossoms.” Their first significant encounter took place in December 1862 at Fredericksburg. They played a key role in the Battle of Chancellorsville in 1863. Next they fought like lions at Devil’s Den during the Battle of Gettysburg, where Colonel Ellis, their beloved leader, was killed. Three other officers and 31 enlisted men from the regiment also died during the battle. The regiment took part in the Overland Campaign, Battle of the Wilderness, Cold Harbor, Spotsylvania Court House, and they were there at the Siege of Petersburg and Appomattox Courthouse.

LaRocca was the perfect historian for the task of capturing the exploits of the Orange Blossoms. His interest in the regiment dates back to the early 1990s when he published his first book dedicated to the regiment titled, This Regiment of Heroes, and indeed the titled was very appropriate.

The 124th New York State Volunteers in the Civil War is a deeply research study that incorporates significant primary sources including letters, diaries, and other regiment correspondences. LaRocca takes the reader on a personal journey with regiment quoting freely from the common foot soldier, newspaper accounts, and regimental officers. Intertwining within this personal narrative is a keenly built story of the Eastern Theater operations that the regiment took part in. The reader is able to follow the maneuvering of the regiment within the larger scheme of the Federal army.

Adequately illustrated (probably the only weakness I would have liked a few more maps) the book also contains dozens of photos and a regimental roster. I highly recommend this regimental study to every Civil War historian, especially those with an interest in the Eastern Theater.

About the Book
The 124th New York State Volunteers was one of the great fighting regiments of the Civil War. In this thorough history, the author has used letters, diary entries, and remembrances, many of them previously unpublished, to present a view of the war as the men in the ranks saw it. At Chancellorsville, Gettysburg, the Wilderness, Spotsylvania Court House, Petersburg, and many more battles, the “Orange Blossoms” earned a reputation for sacrifice and bravery, eloquently put into words by Private Henry Howell. As he lay wounded, he described the charge that broke the Confederate line at Spotsylvania–“everyone was borne irresistibly forward. There was no such thing as fail.” The book includes a roster of all who served in the regiment and numerous photos of individuals.

About the Author
Charles J. LaRocca is a retired high school and college level history teacher who founded a student research and reenactment group based on the 124th New York (named by the State of New York “An Historic Military Command,” the only Civil War group so designated). He has published articles and two books and lives in Montgomery, New York

Next post: WHITE AND COLORED TROOPS IN THE UNITED STATES ARMY — A COMPARISON