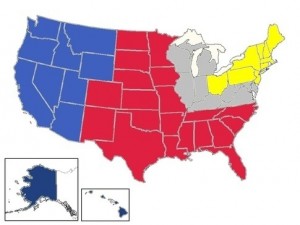 With all this nonsensical talk from various parts of the country regarding secession in mind, I came across the following article (editorial) at Slate.com, “If Every U.S. State Declared War Against the Others, Which Would Win?” Apparently the article was from an original question that appeared on Quora under its “hypothetical battles.” The simulation (or answer) was provided by a sergeant in the U.S. Marine Corps, Jon Davis, a veteran of Operation Iraqi Freedom. Here is part of it:

These are the accounts of the Second American Civil War, also known as the Wars of Reunification and the American Warring States Period.

After the breakup, many wondered which states would come out in control of the power void created by the dissolution of the United States. There were many with little chance against several of the larger more powerful states. The states in possession of a large population, predisposition for military (i.e.) military bases, and a population open to the idea of warfare fared the best. In the long term, we would look to states with self-sufficiency and long term military capabilities.

Here are the states that held the greatest strategic value from day one. They have the ability to be self-sufficient, economic strength, military strength, the will to fight, and the population to support a powerful war machine.

Others that have many of the qualities that gave them an advantage are also listed.

For all intents and purposes, Alaska and Hawaii ended well enough since they were so far removed from the center of the country that they never really suffer greatly nor benefit from the shattering.

Previous post: What Quality Controls do We have when it comes to Material Posted on the Web?