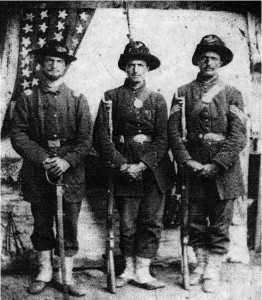 The 2d Wisconsin Infantry was primarily raised in Madison, Racine, Milwaukee, Oshkosh, and La Crosse and entered into Federal service on June 11, 1861. The regiment would have 1203 soldiers enroll into its ranks throughout its service with 238 killed or wounded in battle for a 19.7% rate.(1) Therefore, according to William F. Fox’s study, the 2nd Wisconsin suffered the highest rate of losses in battle. However, the figures of the Second Wisconsin losses should be much higher (as would all the other regiments) when taken into account the actual number of men who went into battle. Men got sick, died of disease, deserted and simply never made it onto the battlefield. Also, each regiment carried a number of “musicians, teamsters, company cooks, officers’ servants, Surgeon’s assistants, and Quartermaster’s men.” So as one can see, if the percentage was based on those who entered into the fray, the “figures would be still more startling.”

[The photo of the three soldiers are the Booth brothers: Lt. Willam, Pvt. George, and Sgt. Samuel, all of the 2nd Wisconsin V.I. Company C, likely taken in May or early June 1862 at Fredericksburg.)]

1 – William F. Fox, Lt. Col. U. S. V., Regimental Losses in the American Civil War, 1861-1865: A Treatise on the extent and nature of the mortuary losses in the Union regiments, with full and exhaustive statistics compiled from the official records on file in the state military bureaus and at Washington