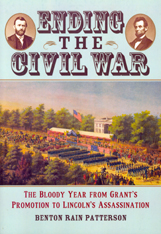 Mr. Patterson, emeritus associate professor of journalism at the University of Florida, via McFarland has written an uninspiring take on the final 13 months of the Civil War titled: Ending the Civil War: The Bloody Year from Grant’s Promotion to Lincoln’s Assassination. Awkward in its organization and limited in its presentation of the political and military aspects of the time period, but perhaps most disappointing, the lack of scholarship and research. Some chapters contain only a handful of citations with several containing 15 or less and one merely a dozen! How do you write a book that is supposed to explore one of the most tumultuous times in American history and not even scratch the surface of scholarship in the field? An examination of the journalism of the time would have been an interesting angle given Mr. Patterson’s professional background. Nonetheless, Ending the Civil War is barely worth dealing with as a historian and in consideration of the cost, not worth the bother for you the average Civil War enthusiast or historian. Stay away!

Next post: Book Review: To Petersburg with the Army of the Potomac: The Civil War Letters of Levi Bird Duff, 105th Pennsylvania Volunteers