Who Was the Common Soldier of the American Civil War? 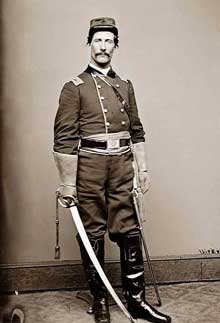 History.Net looks at the question: Who Was the Common Soldier of America’s Civil War? If you follow this website and the mother site Soldier Studies you know we have a webquest dedicated to the Civil War soldier that covers a lot of this information.

How Many Fought
About 2.75 million soldiers fought in the Civil War — 2 million for the North and 750,000 for the South.

The Average Soldier
According to historian Bell I. Wiley, who pioneered the study of the Civil War common soldier, the average Yank or Reb was a ‘white, native-born, farmer, protestant, single, between 18 and 29.’ He stood about 5 feet 8 inches tall and weighed about 143 pounds. Most soldiers were between the ages of 18 and 39 with an average age just under 26.

Why They Fought
Men on both sides were inspired to fight by patriotism, state pride, the chance for adventure, or steady pay. Union soldiers fought to preserve the Union; the common Confederate fought to defend his home. Later in the war, increasing numbers of Yankee soldiers fought to abolish slavery, if for no other reason than to end the war quickly. Confederate soldiers sometimes fought because they feared Union victory would result in a society where black people were placed on an even footing with whites.

Army Melting Pots
The large majority of Civil War soldiers were native born. Nonetheless, large numbers of stout-hearted newcomers to the country also volunteered to fight–especially in the North. Nearly one quarter of the Union’s soldiers were immigrants, including 200,000 Ger-mans; 150,000 Irish; 45,000 English; 15,000 Canadians, and lesser numbers of French, Norwegians, Italians, Mexicans, and Poles. Exact figures for the South are sketchy, but tens of thousands of Irish, Germans, British, French, Canadians, Dutch, and Austrians entered Confederate ranks.

Previous post: 150th Anniversary of the Battle of Antietam: The Angles of Antietam