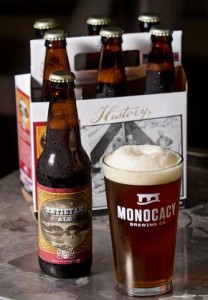 The first of nine beers to commemorate the 150th Civil War anniversary — Antietam Ale — is now on tap.
The concoction was derived from a number of beer recipes from the 1800s and researched by National Museum of Civil War Medicine researcher Terry Reimer.

Antietam Ale is based on a recipe for an English-style ale once brewed by Brewer’s Alley — a style commonly referred to as an ordinary bitter, Brewer’s Alley marketing manager Jim Bauckman said.

The strength is relatively low compared with that of modern beer renditions, Flores said, but making the brew still involves a lot of complexity.

Previous post: Who Was the Common Soldier of the American Civil War?