On April 11th, 1864 Union soldier Joseph Harris wrote a scathing assessment of some Northern newspapers to his friend or associate Cornelius Pervin. But not just an attack on the newspapers, but challenging his friend on his apparent “Copperhead” political disposition. The content is excellent as it addresses several political themes that are to this day debated about historians. How did the idea of the war transforming into what Harris calls a “Nigger war” impact soldier’s such as Harris who clearly and passionately refused to believe that the war’s purpose had shifted at all to the destruction of the institution of slavery. The letter’s matter of fact presentation of the differences between loyal “Union” press and of course the treacherous copperhead displays how passionately many soldiers felt about the cowardliness that perceived to be on display. But what is also interesting is though Harris clearly was not an abolitionist he writes himself into a corner where by the letters end he enthusiastically declares, “I say if all this constitutes an Abolitionist then I am one and so is the army and a great body of the American People.” How he gets to this declaration is very interesting and I’ll allow you to read the letter and come up with your on take on Harris and his very passionate take on newspapers and politics. Enjoy! 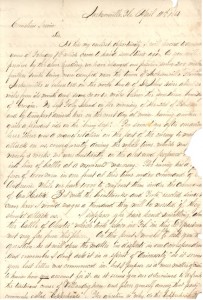 Sir,
At this my earliest opportunity I will proceed to answer yours of February 7th which came to hand some time ago. As you will perceive by the above heading, we have changed our position some 200 miles further south now camped near the town of Jacksonville Florida. Jacksonville is situated on the north bank of the St. John’s River about 30 miles from its mouth and some 30 or 40 miles below the southern boundary of Georgia. We left Folly Island on the morning of the 23d of February and by transport arrived here on the next day at noon – having another quite a pleasant ride on the “Bring [?] Deep.” For sometime after our arrival here there was a manifestation on the part of the enemy to make an attack on us. Consequently during the whole time, which was nearly 3 weeks, we were constantly on the alert and prepared ready […] into line of battle at a moments warning. The enemy has a […] force of 1300 men in our front at this time under command of […] Anderson, while we have 10000 to confront them under the command of Gen Hatch [?]. But with the breast works and forts erected since we came here I would wager a thousand they will be waisted [?] if they should attack us. I suppose you have heard something about the Battle of Olustee which took place in Feb. in this Department no very far from this place. On this point I would like to ask you a question as it will open the matter in dispute in our correspondences and remember I don’t ask it in a spirit of “animosity” as it seems your last letter was commenced in, but I propose as a mere matter of curiosity to know how you account for it as it seems you are determined to defend the traitorous curse of Vallandigham [?] and place yourself among the party commonly called ‘Copperheads.” The question is why do the Copperheads […] publish with so made explanation, all the details of a defeat to the Union arms, while they give but a passing notice without a word of rejoicing when success crowns the efforts of our army? A late instance of incomparable meaness in this line was in regard to the Battle of Olustee. We do not deny but what this was a defeat to our forces but the question is why do coppherhead papers herald it with such satanic glee throughout the country in flaming head lines while the really brilliant raids of Kirkpatrick and Smith are hardly noticed. You need not tell me they do it to give the people information about occasional blunders made in the army – in order to call for information for this would be a good motive and good is a contraband article to Copperheadism, but they do it from one of the basest motives that ever cased mortal man to sin and that is to present the darkest picture possible of the war to the people at home in order to discourage them from lending their aid to the army that has so proudly borne the old Stars and Stripes battling for [the] Union, battle against the hydraheaded monster of Secession and battling for that Constitution which is the bulwark of our [?] and that […] flag the emblem of Freedom and a shield for the oppressed of every land.