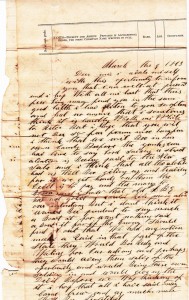 Confederate letters do not come up as often as Union ones and for various reasons. So when one does come up as exceptional as this one I like to highlight it. The soldier is S. N. Duncan, there are 40 that came up in the Civil War Soldiers & Sailors System. Duncan speaks very passionately about the war, why he is fighting, about Abolitionism, and his fallen comrades. Truly an exceptional letter!

I avail myself with this opportunity to inform you that I am well at present and I hope with all my heart that these few lines nay find you in the same good health. I have written to you so often had had no answer that I sometimes think it is hardly worth my while to write but I hope that you will not be so far from me long for I think that we will be in our own county before the Yanks come.

Had time to say look —–.Attention is being paid to the new — and I think that all the abolitionists had as well be getting up and traveling for if we get hands on them the Devil is to pay and the money to borrow avail is how old MBE has most got it. I could write more about our intending but I don’t think it be prudent to say much about it for ain’t nothing said about it for if the enemy should find out that we had any notion making a raid in that part of the state they would be ready and waiting for our army and perhaps they would — themselves of the opportunity and would bring their own soldiers in and would give us the Devil. Before we was thinking of it. I hope all I have said may come true and as much more will be profitable.

Here goes for old times that in my mind is not forgotten. I think back upon the times with a sad heart. Wish to God that I could (be) with you and see as much fun s we seen this March one year ago but we aren’t so favored as we was then. I had had hard times until I —- pretty hard myself but I think that if I could get home and see you all that I would soon forget all that I have had to endure. But don’t think I am complaining at all for I am not. Give me hard times and — at home and give me Liberty or Death. They are the feelings of all the soldiers in our Army.

I have almost forgot how to write and I hope that you will excuse me. My mind is so confused that I can’t think of anything that I would like but I hope that you can think as well. I can perhaps — over happy hours that we have seen in time that is you and perhaps will never return for the future of war is uncertain. But I hope that I may yet see you all and enjoy pleasure being with you perhaps never to be parted under the same circumstances that we are now. At least I hope that we may part until death us do part.

I would close but you can see that I have plenty of paper and nothing to write but I will as much as I can about the things that are upon my mind. If you haven’t forgotten me but I can’y think that you would. I could not forget you. If you were in my place but I suppose you have as much fun as if I was with you but I hope for the better and I hope I may not be disappointed in my belief.

If you forget me here put me down and sink down to the soldier’s forgotten grave there to be thought of no more. For thee I live and for thee I enter the field of battle for thine freedom and happiness do I suffer the riggers there of.

Give my best to all my friends and keep some for yourself. I would write more but I must close, I am well and all the boys that you are acquainted with. Tell — that I want him to —-as much as he can. We have a good Captain and I would like for him to get the boys all right as far as — he can. Our Captain’s name is Martin. We are in a regiment. We leave Tuesday.

No more at present. But your friend to death.

Next post: Fields of Blood: The Prairie Grove Campaign