As we know Civil War soldiers were some of the most prolific writers in the history of modern warfare (if you want to call the Civil War the first modern war or the last Napoleonic I don’t care!). As a collective they wrote easily hundreds of thousands (maybe millions) of letters home. Some regiments had their own newspapers and published their own pamphlets. But also, countless soldiers wrote home to their local newspapers as War Correspondents. They usually used an alias and their letters ranged from simple narratives of daily happenings to political pontification. Sometimes regiments had numerous soldiers writing home to local papers to dispel rumors, correct inaccuracies, and even to complain about the lack of support back home.

These correspondences are not always utilized by historians and I understand the complaints. Many are simply self serving of a regiment’s exploits and are often filled with inaccuracies and embellishments. I’ve read hundreds maybe thousands of Soldier Correspondent communications published in newspapers and I have found that there are valuable nuggets of information. I used them countless times in my study of the 11th Wisconsin Infantry Regiment. I find that when a passionate soldier (writing under an alias) writes home to his local newspaper describing the trials and tribulations soldiering, that the truth is more easily recognizable than it is in private letters home to a loved one whom the soldier does not want to worry. 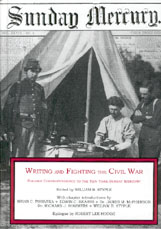 With this in mind I requested and received a review copy of Writing and Fighting the Civil War: Soldier Correspondence to the New York Sunday Mercury edited by William B. Styple. The book is a select collection of these soldier correspondences from New York soldiers to the Sunday Mercury newspaper. Dozens of regiments are represented and the topics cover a wide range of events and issues faced by the soldiers. The book is arranged chronologically and each year opens with a page or two introduction by a historian.

In order to show the usefulness of such a collection of correspondences I looked in the Index for a topic to highlight. I decided to look at every entry for “Slavery.” Here’s some highlights of what I found:

1861
The headline reads “The War” and in this first letter the author bemoans the Anaconda Plan writing that “our government must conquer treason in the whole South… The time is past for any terms of peace.” He then goes on to lay-forth an outline for the reasons why the South cannot win. He finishes with the following, “Finally, There hangs over the South the black and horrible thunder-cloud of Slavery. Four millions of slaves, once aroused to rebellion, would be enough, alone, not only to conquer the South, but to make it such a scene of horror as the sun has never gazed upon.” And indeed, very true, the 200,000 blacks who became soldiers were a vital and timely supply of man power, but just as importantly the sight of a legion of armed black soldiers coming over the horizon had to be truly frightening for a Southerner.

Yet another correspondent writes, “For the last thirty years, the institution of slavery has threatened the destruction of this Government, and the time has arrived when it is necessary to choose between free and slave labor.” Continuing he points clearly to what he sees as the true cause of the war, “that slavery is the cause of this rebellion…”

1862
However, Slavery was not the cause or the justification of the war in many soldier’s eyes. One wrote very succinctly why he was fighting: “Being asked by one of them [a southerner] if I was fighting for the abolition of slavery, I replied, ‘no sir!’ That I was in the service of Uncle Sam, to aid in restoring the Union…”

Yet another soldier figured that though future generations will decided, the war was about slavery. “Let the remembrance of the past, the great duties of to-day, and the hopes of a glorious future animate you to a holy daring. Let the historian record for distant centuries, that in the death-struggle between Slavery and Freedom on the American Continent, whoever were traitors, the blacks were true; that though their country at first declined their services, the instant she called they rushed to her support…”

A powerful message to future historians about how we should remember the war. I must admit that as represented in this selection of letters in the Sunday Mercury, the belief that the war was over slavery was more prevalent than I would have expected. But nonetheless the sentiment that the war was about “Union” was still a more consistent and powerful theme.

For example, continuing in 1862, after McClellan’s dismissal, “The nigger-worshippers at the North have been itching for McClellan’s removal for some time. Is this war for the salvation of the blacks or for the continuation of the Union…” he goes on to clearly note that the war better not be about free the slaves over the Union.

1863
However harsh some soldiers might have felt towards Blacks, I truly believe in all my research that even some of the most ardent haters of Negros began to soften once they traveled South and saw the institution of slavery up close and personal. For example, one soldier wrote, “Poor devils! nothing seems to trouble them but the dream of their old master catching them again.” This was near Fort Monroe where in 1863 black regiments were forming, the same soldier continued: “I went to see a regiment of Negroes at Fortress Monroe. If they fight as well as they look, the enemy had better keep his eyes skinned…” Blacks played important roles before becoming soldiers, many regiments and commanders relied on local blacks as informants, “A reliable contraband came within our lines and reported that the enemy was advancing,” and this information probably saved or at least helped this unit out tremendously.

1864
An interesting observation by one soldier in 1864 when he came upon some of Virgina’s wealthiest plantations that the housing quarters for slaves were far better than expected, “Very comfortable quarters on every plantation… the Negro-houses are scarcely inferior to the mansions of their masters.” Most likely an exaggeration but the point was taken. I have came some across similar comments in letters home from the Wisconsin soldiers I have studied. Some were surprised in Louisiana how nice the slave quarters often were. But we have to remember, many of these soldiers lived at home in rock, log and mud mortared homes. But nonetheless, the point is taken and it is an interesting observation.

Continuing the theme, the comments about slavery, a soldier noted the “horrors of slavery…” Yet another comment on blacks as soldiers and why they would fight without equality, “I should not wish to fight for a country where I was denied the right of suffrage.”

Stopping my exploration there as 1865 continued with the same themes, it is clear that White Civil War soldiers were very aware of the social and political aspects of race relations and the impact of slavery on the war whether they supported its destruction or not. Exploring Civil War newspaper correspondences can offer a wide range of political, social and of course military opinions and reflections that as far as I am concerned, are at the least useful starting points.

A wonderful book and that every Civil War historian should have a copy is an obvious observation in my opinion!