The Civil War Soldier and Death 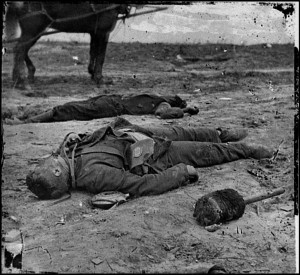 Historian and author Dr. Gilpin Faust has written extensively about death and the Civil War. Her book This Republic of Suffering: Death and the American Civil War (Alfred A. Knopf, 2008) explored the impact of death on the Civil War generation. I just recently came across a 2001 article Faust wrote called “The Civil War Soldier and the Art of Dying” published in “The Journal of Southern History,” (Feb., 2001). I bring this up as the article is available (at least for now) online here.

Civil War soldiers (and their generation) were not unfamiliar with death, obviously. Compared to the 20th Century, the mid-19th Century experienced a higher death rate, especially with regard to young children.

However, despite death being a constant in one’s life, the Civil War took it to a whole new level. Barely a family went unscathed in experiencing the death of a loved one or close relative. Healthy White males dying during the prime of their lives was, however, fairly unusual and not expected.

Faust explores several themes and two I want to touch on: Good Death and the Isolated death. Soldiers were very aware of a set of values that centered on honor and what we might call “Being a Man.” How they faced death and even combat would be judged. It was rarely missed if a soldier “shrunk” from battle and disappeared. Examples were those soldiers who insisted on helping a wounded soldier to the rear, then failing to return to the fight. The isolated death refers to dying away from home and the fear of dying alone. Being so far from home and dying alone was a big concern for both soldiers and families.

This simple post does not do Faust book or article justice. so if you get a chance check out the article linked above or grab a copy of her book.

Next post: Civil War Soldiers: The Blue and Gray Will Go Green?