Book Review: The Civil War in the West Victory and Defeat from the Appalachians to the Mississippi 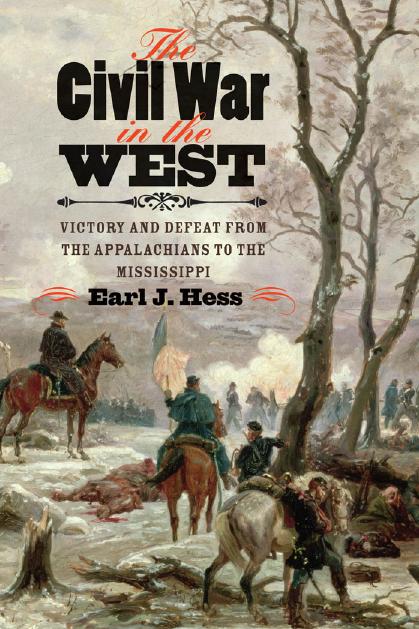 In The Civil War in the West: Victory and Defeat from the Appalachians to the Mississippi Earl J. Hess answers in his conclusion a much debated question, Which theater of operations was more important in the outcome of the Civil War: Western or Eastern? Dr. Hess declares that “The Union won and the Confederacy lost the Civil War largely due to what each did, or failed to do, in West.”

When historians discuss the reason for why the South lost they rarely include the Western Theater as a major piece of that puzzle. Way back in 1999 American History magazine asked 10 prominent Civil War historians to offer their take on why the South lost. Only one (Richard McMurry) of the 10 specifically mentioned the West as the reason the South lost the war: “Any explanation that does not account for the West is irrelevant to your question. The war was lost by the Confederates in the West and won by the Federals in the West.” Another hinted that the West was key, but regardless, that only one came out and said it was interesting.

According to that pool of historians, it was a combination of issues that caused the South to lose: Leadership (generals and President), Resources not available or used properly, economics, Man Power, ect. And so it came down to a numbers game, either the South couldn’t win because it didn’t have the numbers (man power, railroads, industry, economy, ect.) to do so or simply, the number of days, weeks, and years of hard fighting doomed her from the start. Take your pick!

Earl. J. Hess is probably one of the leading military historians of the Civil War. Unlike myself, where my main area of study is primarily the West and in particular the Trans-Mississippi region, Hess has written fairly extensively on both the Western and the Eastern Theaters. So his assessment that the South lost the war in the West was a telling conclusion. Hess clearly displayed in his book that the South did not do enough to defend the West properly and made most of its mistakes there.

However, this book wasn’t really about defending a thesis about Why the South Lost the Civil War. Hess fleshes out a nice, general narrative that covers a vast area of the Western Theater from the Appalachians to the Mississippi, and does so with brevity. This book is more of an overview and would be of great interest to students and general enthusiasts. However, as a Trans-Mississippi historian I still found the book of value with plenty of tidbits I was not aware of.