Civil War Soldiers: The Blue and Gray Will Go Green? 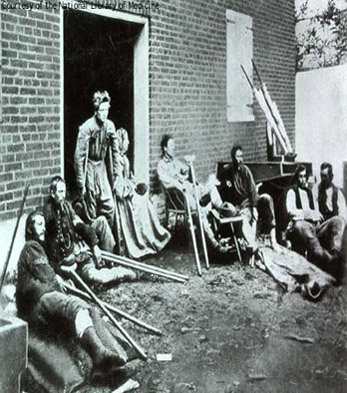 In the March 2012 Issue of The Journal of the Civil War Era there was a series of essays/editorials that dealt with the future of Civil War studies. Stephen Berry, associate professor of history at the University of Georgia, kicked it off with his piece, “The Future of Civil War Era Studies“. In it he offered his “‘top ten’ predictions for how broader professional trends will reshape Civil War historiography.” I offer the entire list below but want to point out one in particular, “The Blue and Gray Will Go Green.” Here it is as quoted:

#7: The Blue and Gray Will Go Green

Living on an overextended planet in an era of dwindling resources, we are reminded with new urgency that Alfred Crosby has been screaming at us for forty years: the environment pushes back. Some thematic fields are like lenses we put on or take off. Others alter the way we see. Gender history, for instance, was once something a smaller group of scholars focused on; now it is something the entire academy is attentive to. It is a lens we cannot take off (although I sometimes fear that we are doing exactly that). Environmental history has this same trajectory. In ten years, ignoring the nonhuman matrix within which human events unfold will seem as ludicrous as conflating all history with the activities of a few white men.

I don’t argue that Mr. Berry is probably 100% correct, the Civil War is going more “green” than it is say more towards what I call “soldier studies.” (If you do not know what I mean by “soldier studies” look around the site.) What was the impact of the Civil War on the environment? Probably on a smaller scale than say World War I, but nonetheless it had to have been devastating on certain regions and areas; and actually I am interested in this some, as I still feel we have not done enough to look at the impact of the suffering caused by the collateral damage of the war on the civilian population. How many died as a direct or indirect cause of the war (disease, starvation, exposure, ect.) and not just the soldiers? But I digress. Once again, I do not argue that Mr. Berry is incorrect, I guess I am concerned about the future of a field that I think is as important as any of those discussed in Mr. Berry’s editorial.

#10: Civil War History Will “Go Big”
The author quotes Aaron Sheehan-Dean, who declared: “We are in danger of learning more and more about less and less… Civil War scholars need to write broader histories in both temporal and spatial terms.” The Civil War field, as the Berry noted, has expanded tremendously with the evolution of social historians and the like. But as Sheehan-Dean took note of we’re learning a lot about stuff that probably doesn’t appeal to the larger book reading Civil War public. However, as Berry appropriately notes, historians must publish or perish and there is “incentive to “go small” to get published. Also, for example, when a doctoral candidate approaches a topic for study it has to be micro in scale to succeed. But the focus of these “small” studies rarely is on soldier studies. What is the future of soldier studies and will it “go big” with all the other small stuff?

#9: The “Long Civil Rights Movement” Is Getting a Whole Lot Longer
This is really in my opinion the strength of this new journal as it doesn’t just look at specific Civil War topics, it looks at the “Era,” and all it contains. And obviously as we have seen the study of emancipation, Reconstruction, and the structure of race relations that flowed from those events and how they evolved in the Gilded Age are becoming very important topics. A war was fought that freed the slaves yet it would take another 100 years for real Civil Rights action to take place.

#8: Civil War History Will Become a STEM Discipline
Berry sees the field of “Science” becoming more involved in the study of the Civil War era. From environmentalism to psychohistory.

#6: Professionals Will (Finally) Study Logistics
“How about a history of grass?” That’s a quote from Berry. I think he is serious.

#5: The Transnational Trend Will Continue
Looking at the Civil War from a broader perspective and I would guess Barry would probably say a more nuanced approach, or in his own words: “You can’t drink a cup of coffee these days without thinking about Brazilian bean-pickers, Nicaraguan sugar-harvesters…” I have to admit I never think of my coffee like this.

No desire to describe the next three:

#4: It Is No Longer “Cute” to Be a Luddite
#3: Political Correctness Will Become Less Important than Correctness
#2: Sacrifice Is Out. Selfishness Is In.

#1: The Civil War Is about to Have a Very Gloomy Birthday

This one I agreed with the most. Berry writes that the 150 anniversary of the Civil War will be “met by a collective national shrug, even in the South.”

Why is that? Is it how we teach it or remember it? Is it the “smallness” of historical study Berry is celebrating above?

Berry says we’re not interested in studying the ugly side of history. “The reason is not far to seek: the war and its racial legacy remains a can of worms most states don’t want to open publicly. Why shine a light or build a stage just so neo-Confederate dead-enders can perform their ludicrous one-man shows?” This is probably his best point.  Hard to argue against him, as we still have groups out there arguing that blacks fought willingly with their slave masters. (See Kevin Levin and others who absolutely destroys the Black Confederate myth.)

The battle for how we remember the past is at stake, but is that really a new battleground for historians? Of course not, we have in our past produced far too many history text books that denied the role of slavery and the impact of race relations with regard to the Civil War and its generation. I think for several decades now that has been reversed and then some. To me textbooks have swung to the opposite side of the pendulum.

So in conclusion, I think that soldier studies is the one area that looks the bleakest. It was thriving a decade ago, but where does it fit in in the “Top 10” list above? Does the Top 10 described here get you excited about learning about the Civil War? I guess that has more to do with your field of expertise. And I know, thanks to historians like Bell Irvin Wiley, social history with regard to the Civil War started with soldier studies, so why am I complaining!?

Next post: Writing and Fighting the Civil War: Soldier Correspondence to the New York Sunday Mercury