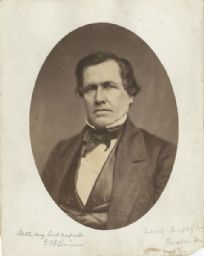 E.B. Quiner was the Civil War historian for the State of Wisconsin during the Civil War. Quiner and two of his daughters (who served as nurses) collected newspaper clippings dealing with Wisconsin State Regiments. From 1860-1862, Quiner served as a private secretary to the governor, and after that dedicated much of his time to the collection of what has to be tens of thousands of newspaper clippings detailing the exploits of Wisconsin units, and organized into ten volumes.

After the war he wrote “most frequently cited book” about Wisconsin’s sons who fought in the Civil War: Military History of Wisconsin: A Record of the Civil and Military Patriotism of the State in the War for the Union. (Chicago, 1866). Quiner’s work on preserving newspaper clippings has to be one of the triumphs of journalism and preservation of the Civil War. We highly recommend historians and enthusiasts check out The Quiner Papers, but be prepared, the ten packed volumes are simply overwhelming and daunting.

Previous post: Life of the Colored Soldier CALL FOR SUBMISSIONS!