The Charge of the Heavy Artillery

[This is one of more thoughtful and provoking reflections by a soldier concerning a battle that I have ever come across while curator for Soldier Studies. This account was published in the “Main Bugle” (January, 1894.) a short lived quarterly publication depicting the exploits and histories of various Maine regiments. The 1st Maine Heavy Artillery Regiment took part in one of the most intense and bloodiest engagements you will ever read about. On a stretch of farmland outside of Petersburg, Virginia, the greenhorns (the regiment spent much of its time safe and secure protecting Washington) of the 1st Maine numbering 900 strong made one of the most deadly assaults of the Civil War. Of the 900 brave souls, 632 were casualties, including 210 dead. Here is a first hand account by one of the few who survived. The regiment would go on to lose 1,179 men in 30 days according to one account. Sources: Brown, Joel F. “The Charge of the Heavy Artillery”, Maine Bugle, January 1894; House , Charles J. “How the First Maine Heavy Artillery Lost 1179 Men in 30 Days”, Maine Bugle, April 1895.] 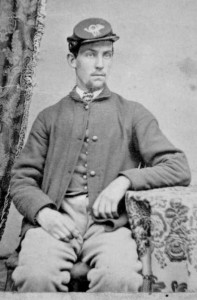 Nearly thirty years have passed since 1864, and scenes clear and bright to memory once have become dim and misty now. Time and the smoke of the battle of life have obscured the recollection of those days of trial and danger. One scene, in which it was my lot to act an humble part, is burned on my memory so deeply that nothing will ever efface it. I have only to close my eyes and I can see it clear and distinct as I saw it then. It was the charge of the famous First Maine Heavy Artillery at Petersburg on the eighteenth day of June, 1864. I was a member of Co. I of that regiment, and after having lain in the defenses of Washington for eighteen months, where it was a ceaseless routine of drill six days in a week with inspection and dress parade, supplemented with a little battalion drill and church service for variety, on Sunday, we joined the Army of the Potomac, a full artillery regiment, eighteen hundred strong, just in season to receive our first baptism of fire at Spottsylvania Court House in an action known as the fight at the Fredericksburg Road.

How well I remember, when we joined the army, the old veterans laughed at and jeered us, called us “Abe’s pets,” “Paper collars,” ” Band box soldiers,” etc., just as though we could help staying in the defenses of Washington when the “Powers ” thus decreed. How well I remember that first fight, where our heavy artillery brigade under the lead of the gallant Gen. Tyler confronted the whole of the rebel Gen. Elwell’s corps and held them in check for two hours and a half until reinforcements arrived and drove them off the field. The rebs outnumbered us three or four to one, and according to all the rules of war we were whipped several times over, but it was our first fight and we were green at the business, as well as being Abe’s pets, etc., so we did not know we were whipped and kept on fighting. The rebs got disgusted with our way of shooting straight at them and kept behind a stone wall, and the reinforcements coming up, we did not all go to Andersonville as we should have done if they had been disposed to advance their flanks and simply scoop us all in. I well remember also that an old veteran came over to where we were lying in a piece of woods and said, “Well, you can fight if you did come out of the defenses.”

Such was the charge of the First Maine Heavy Artillery on the eighteenth day of June, 1864, before Petersburg. I do not believe there was a man came out of that charge without some mark about his clothes. I had a bullet through my cap, cutting off a lock of hair close to the skin, one took off the heel of my shoe, two went through my canteen, one cut the bayonet scabbard in two, and one went through the left sleeve of my blouse leaving a small splinter in the arm, where it is yet. I have never attempted to talk about that charge; I cannot, neither can I describe it; it is beyond description; but I can see it yet, and suppose I always shall.

Has any regiment in ancient or modern time suffered so severely? Behold the record!

Next post: Letters Home from the Front, Christmas 1862, Such is the Fate of War