The Civil War: Strange and Obscure Facts You Didn’t Know 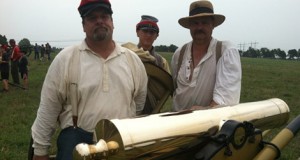 Some interesting facts from the Smithsonian that are indeed “obscure” and some “strange.” I was interested in this one, which caught be by surprise, it dealt with “glowing wounds” reported by soldiers during the Battle of Shiloh:

Glowing wounds. After the Battle of Shiloh in 1862, soldiers reported a peculiar phenomenon: glow-in-the-dark wounds. More than 16,000 soldiers from both armies were wounded during the battle, and neither Union nor Confederate medical personnel were prepared for the carnage. Soldiers lay in the mud for two rainy days, and many of them noticed that their wounds glowed in the dark. In fact, the injured whose wounds glowed seemed to heal better than the others. In 2001, two Maryland teenagers solved the mystery (and won a top prize at an international science fair). The wounded became hypothermic, and their lowered body temperatures made ideal conditions for a bioluminescent bacterium called Photorhabdus luminescens, which inhibits pathogens.

More from the Smithsonian