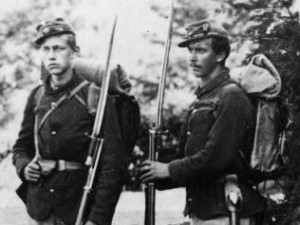 In Middleboro, Mass., the annual parade at 10 a.m. Friday will honor two Civil War soldiers: Andrew Freeman and Bernard Glancy. They will represent hundreds of other soldiers from the town who served in the war. The event will conclude with a ceremony at the Civil War monument on the town hall lawn. In Milton, Mass, the 150th anniversary of the war will be observed with a program titled “Milton in the Civil War” at 7 p.m. Thursday during a meeting of the Milton Council on Aging.

Across the country in Walnut Creek, Calif, Civil War soldiers will be the topic of an 11 a.m. program Friday at the Lescher Center for the Arts Residents have been asked to bring letters and photographs of their soldier ancestors and to share family stories.

The Civil War is the subject of a traveling state historical exhibit, housed in a 32-foot trailer, that will make a stop at the Buena Vista County Historical Museum in Storm Lake, Iowa, on Thursday through Saturday. “The Fiery Trial: Iowa and the Civil War” documents the state’s participation in the war and the impact of the war on Iowa.

At 6 p.m. Friday, historian and author Peter H. Wood will give a lecture at the Farnsworth Art Museum in Rockland, Maine, on a little-known wartime painting of an enslaved Georgia woman by Winslow Homer. “Near Andersonville” shows the woman standing in a dark, covered doorway as Confederates escort Union soldiers in the background.

From 4:30 and 8:30 p.m. Saturday at the Battery Robinett/Corinth Civil War Interpretive Center in Mississippi, 12,000 luminaries will be lit to honor the soldiers from the North and the South who died during the Siege of Corinth.

Previous post: Letter Written to Lieutenant in the 92nd Illinois Infantry by Sister

Next post: The Civil War: Strange and Obscure Facts You Didn’t Know