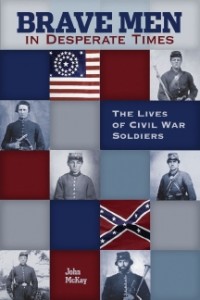 Brave Men in Desperate Times: The Civil War Combat Experience is written by John McKay and published by Globe Pequot.

Those of you who know the focus of this blog and my background know that I am a sucker for anything that focuses on “soldier studies” and the Civil War. Every day there are countless amounts of not seen before letters and diaries that appear online at places like Ebay and here on soldierstudies.org, writings from soldiers of the war that have yet to be published and sometimes even read. There are archives ripe with the stories of soldiers whose names are not yet known and stories not yet told. With this in mind I read McKay’s contribution to soldier studies. How did it go?

Well I purchased Brave Men in Desperate Times a year of so ago and just recently had a chance to read it. Published in 2007, McKay’s focus is on Civil War soldiers and as he declares, to understand what it was like to be a Civil War solider. And within that simple premise, McKay succeeds to a degree, however his intentions were to present soldiers whose stories were not yet told, or as he writes, “So, why were these men chosen? Precisely because of this nearly anonymous status, primarily, and because the relative celebrity of better-known lives would interfere with the attempt to personalize the experience for the reader.”

McKay claims to look at the lives of 15 soldiers, who, “by and large, have never had their stories told in print before, and with very good reason; there is very little in the way of records, official or otherwise, to be found in any known archive about any of them.” Yet not one of them comes from a primary source never published before in some fashion. At least not one that I could fine as there are no citations.

McKay would have been better served to have spent some time in an archive or two as his list of “primary sources” includes nothing but biographies of soldiers, published papers, or edited diaries such as the one Stephen E. Ambrose had published. Additionally, the book has no footnotes and is completely lacking in proper historical scholarship that would equate it with the likes of James M. McPherson and his, For Cause and Comrades: Why Men Fought in the Civil War (New York: Oxford University Press, 1997), or how about Reid Mitchell, Civil War Soldiers: Their Expectations and Their Experiences (New York: Touchstone, 1988) or even Earl J. Hess, The Union Soldier in Battle: Enduring the Ordeal of Combat (Lawrence: University Press of Kansas, 1997). McKay’s book simply does not stack up and shows a complete lack of effort with regard to sources.

Don’t waste your money or your time with this one, in my opinion.